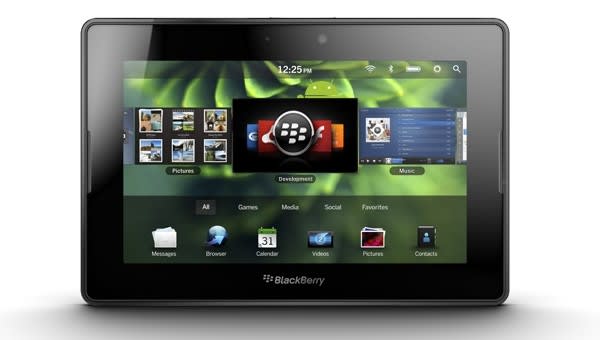 The native app situation on the BlackBerry PlayBook has been one point of contention since the device was first announced, and there's still a fair bit of confusion even now, less than a month from launch. We now have a fairly definitive answer for one key question, however, although it may not be the one you were hoping for. According to an official FAQ provided for a Verizon webinar, the PlayBook will indeed be getting native email, calendar and contacts apps in a "future software update," but you'll have to make do without them initially. That means either relying on the PlayBook's web browser, or using the "Bridge" mode to access the apps on your BlackBerry smartphone. So, the PlayBook may not technically be "reliant" on a BlackBerry, but it is certainly handy to have one around.

[Thanks, Tom]
Source: CrackBerry.com
In this article: blackberry, blackberry playbook, BlackberryPlaybook, native, native app, native apps, NativeApp, NativeApps, playbook, qnx, rim
All products recommended by Engadget are selected by our editorial team, independent of our parent company. Some of our stories include affiliate links. If you buy something through one of these links, we may earn an affiliate commission.
Share
Tweet
Share
Save