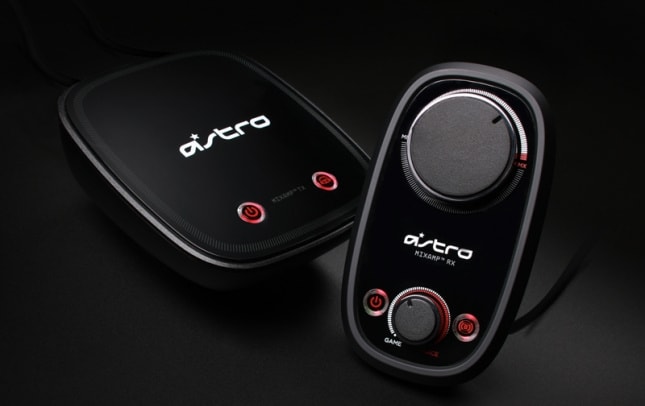 We all know that cabled cans are king when it comes to tonal accuracy. The convenience of cord cutting can't be denied, however, and there are ways to free your headphones from their physical bonds. Astro's Mixamp 5.8 is a system designed to make your wired 'phones wireless, but does it sacrifice sound quality for the sake of convenience? And is it worth $130? Click on through to find out.

How would you rate the MixAmp 5.8?
We want to hear what you think. Post a quick review now to join the conversation!
Write a review

First impressions are important, and Astro's Mixamp 5.8 doesn't disappoint. Both the device and its packaging have a premium look and feel -- which makes sense considering how much going wireless the Astro way costs. A box covered in graffiti and gaming graphics broadcasts Astro's street-chic design aesthetic, and it unfolds to reveal the Mixamp TX (transmitter), Mixamp RX (receiver), and a couple of compartments holding all the accoutrement you'll need to get started.

The TX base station is about four inches square (roughly the size of a 2nd gen Apple TV) and its glossy black topside attracts fingerprints like it was designed to do so. Power and Dolby Headphone on/off buttons and the company logo are all that break up the onyx facade. Around back, there's optical input and output ports, a power plug, two USB ports, and an auxiliary 3.5mm connection for a PS3 chat adaptor cable (sold separately). The RX unit is four by two inches (a bit bigger than a beefy flip phone), and also rocks a shiny black faceplate with a volume knob, a smaller dial to adjust audio / comm channel mixing, and power and bass boost buttons. The back and bezel of the RX are slathered in velvety smooth soft touch plastic (as is the belt clip attachment), and there's a 3.5mm headphone jack, mini USB port, and a 2.5mm Xbox chat cable connection as well.

Setting up the system's a breeze. Simply hook the TX up to your preferred audio source with the included optical cable, plug in the power adaptor, pop some batteries in the RX, and you're good to go. Three AAA disposables are included to power the receiver, but there's also a rechargeable power pack sold separately for $20 -- though for a $130 system, we feel it should have been included. The two devices come pre-paired, but if it isn't working out of the box, a simple press-and-hold of the power button on each unit syncs them up in a matter of seconds. Plug in your favorite pair of earbuds or headphones to the RX and you can commence to wandering with wireless audio.

We used the Mixamp 5.8 while sashaying around our apartment, and must say its 5.8GHz technology kept our audio crystal clear in most instances despite our abode being bathed in 2.4GHz and 5GHz waves of WiFi from a dual-band router. Using a pair of Grado SR60s and Astro's own A30 headphones for testing, we found that sound was faithfully reproduced as long as we were within range of the TX. As for the system's range, signal began to break up once we were 25 feet from the TX unit, and at 30 feet the signal cut out completely (though range was increased by another ten feet with our in-house WiFi switched off). We also had issues if we walked into another room (about 20 feet from the TX with two walls in between) and turned the RX at just the right (or wrong) angle. The system generally worked well, with only the occasional hiccup as we strolled throughout our one-bedroom apartment. When lounging on the couch within ten feet of the transmitter we had nary an issue and the sound delivered really was top-notch. So, in our experience the Mixamp was best suited for sedentary use, but you can still move to the music when the mood strikes.

In addition to cutting the cord, the system has a Bass Expander mode and delivers Dolby Headphone surround sound audio. We didn't get much use out of Bass Expander mode, however. Astro says it injects a "subtle subwoofer effect," but while watching TV, movies, or listening to tunes with the bass boost on, we could only percieve low-end aural enhancements when the volume was cranked well past 50 percent, which was too loud for our listening tastes. With the dial turned up it did provide rounder bass tones, but at lower volume levels we simply couldn't discern a difference. Though given the number of live shows we've been to, perhaps our ears simply weren't up to the task.

Dolby Headphone technology gives listeners the illusion of 5.1 or 7.1 channels of sound in stereo headphones, and its simulated surround sound does deliver richer audio and more realistic imaging while watching movies than standard stereo affords. But, it's still no substitute for a true 5.1 or 7.1 channel setup. We also wished we could easily disable Dolby while we were watching talking heads on SportsCenter -- their voices sounded better in stereo than they did with Dolby's software doing its thing -- but the on/off button was on the TX unit sitting under our TV instead of next to the bass boost button on the RX where it belongs. We also had an OG Astro Mixamp on hand to compare it with its wireless brethren, and can report that the sound quality is nigh indistinguishable between the two (though the original can crank up the volume louder than the 5.8).

Overall, Astro's Mixamp 5.8 works as advertised -- you get to use your corded cans without having wires stretched across your living room. Plus, it's compatible with consoles, computers, cable boxes, and pretty much anything else putting out audio through a standard Toslink connector. It delivers great audio, but in return it requires strapping something the size of a 90's flip phone to your waist to work. And it doesn't rid you of the cord dangling from your ears, either. There are alternatives to Astro's solution, like Turtle Beach's PX5 or Logitech's G930 headsets, which deliver quality sound sans wires, but the PX5s are optimized for console use and the G930 is a PC-only affair. So, for folks reluctant to trade in their high-end wired headphones for a wireless set, but still want the convenience of (relatively) cordless sound, the Mixamp 5.8 will do the job quite nicely.

In this article: astro, astro mixamp, astro mixamp 5.8, AstroMixamp, AstroMixamp5.8, audio, mixamp, mixamp 5.8, Mixamp5.8, optical, review, toslink, wireless, wireless audio, WirelessAudio
All products recommended by Engadget are selected by our editorial team, independent of our parent company. Some of our stories include affiliate links. If you buy something through one of these links, we may earn an affiliate commission.