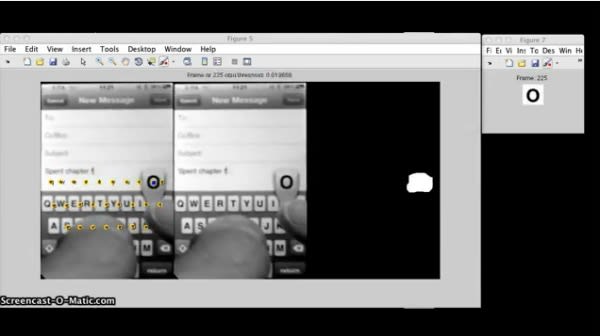 Here's something mildly terrifying to chew on: researchers in Italy have developed a way to automatically harvest anything you type on your smartphone's touchscreen, using only a camera placed over your shoulder. The software, created by Federico Maggi and his team from the Politecnico di Milano, takes advantage of the magnified touchscreen keys you'll find on most iOS, Android and BlackBerry devices. Because these magnifications often pop up in predictable positions, the spying system can recognize and record them with relative ease, with the help of a camera aimed at a targeted display. And it's not like bobbing and weaving around will help evade its watchful eye, since the apparatus can instantly detect sudden movements and adjust its gaze accordingly. Researchers say their tool is capable of accurately recognizing up to 97 percent of all keystrokes and is fast enough to transmit copied passwords in "quasi real-time," which must be music to a lazy criminal's ears. Tiptoe past the break to see the beast in action and spend the rest of your life in an everlasting state of fear.

Via: Slashdot
Source: phretor (YouTube)
Coverage: Politecnico di Milano (PDF)
In this article: android, attack, blackberry, camera, data, espionage, interface, ios, italy, keypad, keystroke, password, politecnico di milano, PolitecnicoDiMilano, research, scary, security, smartphone, software, spying, touchscreen, UI, user interface, UserInterface, video
All products recommended by Engadget are selected by our editorial team, independent of our parent company. Some of our stories include affiliate links. If you buy something through one of these links, we may earn an affiliate commission.
Share
Tweet
Share
Save