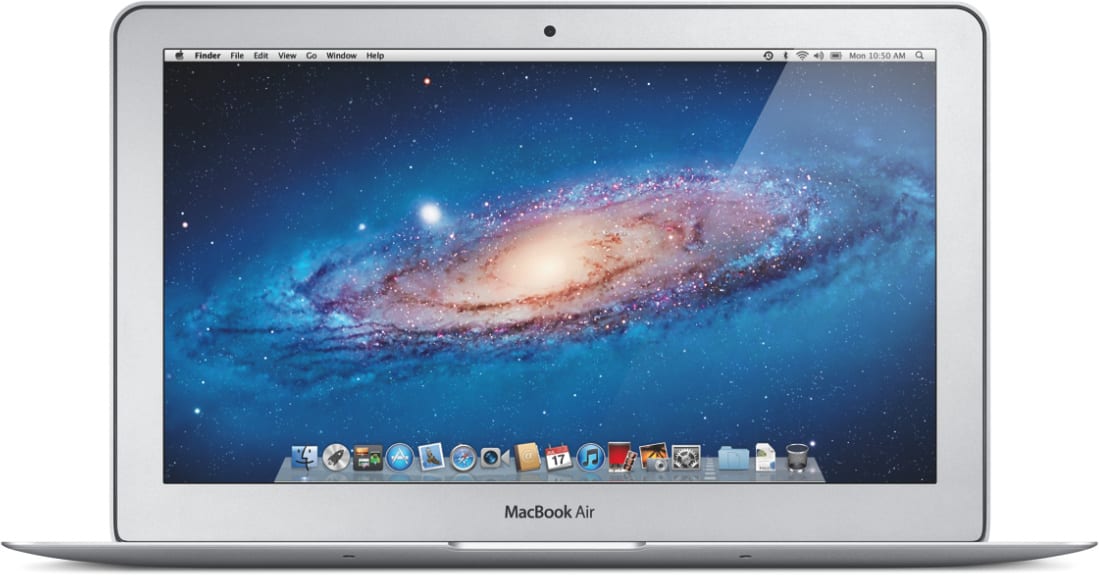 There comes a time when that giant, corporate-issued laptop stops fitting into your lifestyle. When dragging around a Kensington roller case just won't do. When you start to hear the siren lilt of something thinner, lighter, and maybe a bit more alluring. For years the MacBook Air has been that svelte temptress hollering your name, but it's always been a bit too slow -- all show and no go. It didn't have the power and the longevity to make it a serious contender for your serious affections.

No more. With its latest refresh, Apple has taken what was once a manilla-clad curiosity and turned it into a legitimate machine, not just a sultry looker. Good thing, too, because the death of the plastic-clad MacBook means the Air is now Apple's entry-level portable. Weary traveler looking for a laptop that will lighten your load and, it must be said, your wallet too? This might just be it. How would you rate the MacBook Air 11-inch (mid 2011)?
We want to hear what you think. Post a quick review now to join the conversation!
Write a review

The outside of this 2011 refresh of the MacBook Air is virtually indistinguishable from that which came before it. Yes, that means compromises. On the 13-inch model you'll still have to make do with but one USB port on the left and one on the right, but now that latter one is flanked by a Thunderbolt connector, Apple's implementation of Intel's Light Peak standard. This 10Gb/sec interconnect has become standard fare on all new machines coming out of Cupertino, a fact that should help to accelerate the so-far tardy uptake in support from accessory manufacturers.

The 11-inch model is likewise emblazoned, but sadly has still not been granted an SD reader, something restricted to the bigger 13. On the left you'll find a 3.5mm headphone jack, the MagSafe power connector and... nothing else. All other ports have been deemed unnecessary by Apple's designers and therefore relegated to myriad USB adapters for things like Ethernet -- though if you start relying on those you'll likely need to start packing a USB hub as well.

Like before, the omission of these ports leaves the Air free to pinch down to a delicious taper beneath the keyboard, thin enough to make for a decent cleaver when no proper blade can be found -- or when you just can't be bothered to find one. Even on the fat end it measures a mere .68-inches (17mm) thick. Or thin, rather.

So what has changed? The touchpad, surprisingly. It's still big and glassy and situated in the middle of the full-sized palm rest like on the chunkier Pro. Now, though, it's subtly quieter, with a more refined sound and feel as you click away. The previous generation almost feels hollow and has an annoying resonance that's been banished.

The keyboard above, too, has a better feel. Keys are more springy than before, more solid and responsive than the somewhat loose, flappy ones on the last generation. But the biggest change here is what's lurking beneath the keys: a backlight. Yes, you'll now be able to do things like adjust volume, change track, and hit that damned ^ character in the dark. And, thanks to the ambient light sensor hidden in the bezel, you won't have to worry about those keys blinding you in bed.

Step inside the case and you'll find the most important changes here: new Intel Core i5 and i7 ULV processors. The backlit keyboard is nice, and the addition of Thunderbolt could be a boon in 12 months or so, but its the new selection of processors that really turn the Air into a serious machine, as you'll see when we talk benchmarks in a bit.

When it comes to displays nothing has changed: the 13-inch model features a 1440 x 900 glossy, LED-backlit panel while the 11 still does 1366 x 768. We spent our time testing the 13-incher and, as before, it continues to impress when it comes to contrast, brightness, and viewing angles, which are plenty wide enough to enable two-person, coach-class viewing of that latest episode of Top Gear. Contrast is helped by the glossy sheen here -- and no, you still can't option out a matte unit.

We still found its resolution to be more than adequate for most tasks but just a bit limiting for anyone working on photos or doing anything where pixels really count. Honestly, that wasn't much of a concern before thanks to the lack of power, but now...

When it comes time to actually use the thing, when the Air isn't just dead weight in your bag that you want as little of as possible, how does it actually perform? This is when the previous models faltered, and this is where the new Air excels.

When last we tested an Air, the 13-inch model with a 1.83GHz Core 2 Duo processor scored a 2,717 on the GeekBench benchmark. This new 13, configured with the default 1.7GHz Core i5 and paired with 4GB of DDR3 and a 128GB SSD, nearly doubled that: 5,373. No, that won't threaten the full-bore 15-inch MacBook Pro for sheer speed, but double the performance in nine months is a welcome improvement, living up to Apple's 2x promises here, and from what we've seen elsewhere the 11-inch lives up to its 2.5x promises as well.


We also threw Windows 7 on there, Boot Camp making it easy, and ran through a further suite of benchmarks to see how it fares there. PCMark Vantage clocked in at 9,484, actually higher than the 15-inch Pro's 8,041 when we tested it, though the Air's 3DMark 06 score was considerably lower thanks to the limited graphics prowess here, just 4,223. So, it's still no gaming rig, but it is the sort of machine you wouldn't think twice about trying to do some serious business on.

Now, as we all know benchmarks only tell a part of the story, but we're happy to report that the numbers really do fall in line with our impressions here. This machine boots to a Lion login screen in a snappy 15 seconds, apps load quickly, batch photo jobs finish much more promptly, and overall in our time with this machine we did a lot less waiting and a lot more working. But, just like before, be prepared to listen to the thing's internal cooling fan register its complaints whenever utilization rates start climbing.


Despite that, we had no issues with battery life. On our standard rundown test, where we'll loop a video until the machine calls it quits, the new Air clocked in at just over five and a half hours. That's well more than the Lenovo X1 recently managed on the same test and actually about an hour more than last year's model managed when we dusted it off and ran it through the same wringer. Even running Windows the Air managed 4:12 on the same rundown test, on par with the Samsung Series 9.

In standard usage, surfing and typing and Facebooking and such, you should be able to do much better. The Air routinely beat our expectations -- and its own estimates -- for battery life. The seven hours Apple advertises for the 13 (five for the 11) is well within reach if you're not doing anything too taxing. And of course that's a good thing, because you won't be replacing the battery here without a screwdriver.

The 2011 MacBook Air addresses nearly every concern anyone could lob at its predecessor. It's still light on ports, the missing SD slot on the 11-inch model is a drag, and no, it isn't cheap, but this machine is fast, efficient, and not to be underestimated. It's a supermodel with a law degree from Columbia, a hunky motorcycle racer who looks good in leathers yet is also a concert pianist -- whatever your passion it won't disappoint, all while making a lot more room in your bag. More room for what? Well, your life, for starters.

In this article: 11-inch, 13-inch, air, apple, core i5, core i7, CoreI5, CoreI7, engadget awards, engadget awards 2011, EngadgetAwards, EngadgetAwards2011, laptop, lion, macbook, macbook air, MacbookAir, mid 2011, Mid2011, os x, os x lion, OsX, OsXLion, review, sandy bridge, SandyBridge, ssd, thin and light, ThinAndLight, ultraportable
All products recommended by Engadget are selected by our editorial team, independent of our parent company. Some of our stories include affiliate links. If you buy something through one of these links, we may earn an affiliate commission.