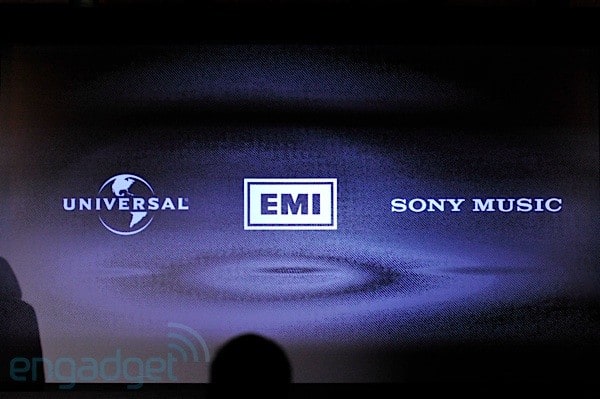 A music store isn't much without plenty of music, and Google's new offering launched with some big backing today. The company is partnering with Universal, EMI, Sony Music and no less than 23 independent labels on the service -- according to Google, that covers about 13 million songs in total, 8 million of which are available today. Speaking at the launch event, Universal's Rob Wells said that he expects Google Music to be a "rich new revenue stream for our artists," and further noted that he's excited about the "global rollout" across all Android devices, although we're unfortunately not hearing many specifics about availability outside the US just yet. What's more, Google also announced that Google Music will have a number of exclusive offerings from the labels, including concerts from the likes of The Rolling Stones, Coldplay, Pearl Jam and The Dave Matthews Band, and the exclusive debut of Busta Rhymes' latest album.

In this article: EMI, google, google music, GoogleMusic, label, labels, music, music downloads, music labels, music store, MusicDownloads, MusicLabels, MusicStore, record labels, RecordLabels, sony, sony music, SonyMusic, universal
All products recommended by Engadget are selected by our editorial team, independent of our parent company. Some of our stories include affiliate links. If you buy something through one of these links, we may earn an affiliate commission.
Share
Tweet
Share