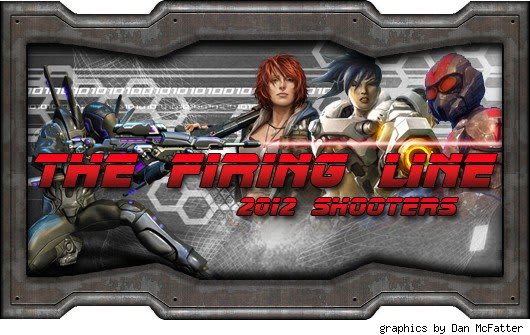 Hello folks, and welcome to my Christmas list (well, the Massively portion of it, at any rate). For this week's edition of The Firing Line, I decided to take a look at a few of the more obscure titles coming down the development pike.

Now, when I say obscure, I don't necessarily mean shoe-string budget indie productions. The games I've got for you after the cut feature a cross-section of both big IPs and big-name development studios, but for whatever reason, they're still a bit under the radar when compared to the likes of PlanetSide 2, DUST 514, and Firefall. Turn the page to read about four online shooters you should be excited about. There might even be some video involved if you play your cards right.

Trion Worlds is most famous for its RIFT fantasy themepark, but thankfully the development firm is spreading its wings quite a bit. In addition to its End of Nations MMORTS, the company is hard at work on a little ditty called Defiance. I haven't played it yet, but if I were forced to choose an omg-release-this-now game from this week's column, Defiance would probably be it.
First of all, it's called Defiance. Blow-away badass and enough said.

Secondly, it's a persistent open-world shooter set on a near future earth (the San Francisco Bay area, to be exact). The real-world setting is compelling for several reasons, chief among them the fact that it's rarely done in MMOs followed closely by the fact that it's much easier on immersion enthusiasts who are forced to deal with large swaths of the gaming populace who don't care about said immersion.

Most refreshingly, when queried at last summer's E3 about the necessity of being able to aim vs. the ability to use tab targeting, auto-attacks, or other MMORPG combat crutches, Trion devs replied that if you can't aim, it's probably not for you.

You'll notice I didn't mention the tie-in between the game and the Sci-Fi Syfy (ack) television series of the same name. That was on purpose. One, I think MMOs based on existing IPs generally suck, and two, outside of Battlestar Galactica, Syfy programming is barely watchable.

Defiance has a lot going for it, in theory, though I am concerned about Trion's ability to simultaneously launch a smooth product on the PC, the Xbox 360, and the PlayStation 3. (I should also voice the requisite disappointment with the lack of cross-platform play). Other than that, though, the game sounds like one of the more exciting MMOs coming up in the next couple of years.

What happens when Batman, Nightwing, and other Gotham stalwarts need an evening off? Something very much like Gotham City Impostors, I suspect. If you're a DC Comics fan or a fan of tongue-in-cheek humor in general, you owe it to yourself to check out the latest Batman-focused trailer for Monolith's online shooter.

As the title implies, this ain't yer daddy's DC game, and you'll spend your nights fragging pixelized versions of those overweight hockey pants-wearing superhero-wannabes who first appeared in Christopher Nolan's 2008 film The Dark Knight. There's a little bit of team deathmatch, a little bit of capture-the-flag (with a sadistic Joker-inspired twist), and a whole lot of absurd and over-the-top customizations that should keep you coming back for more.

In terms of gameplay, early previews place Impostors somewhere between Team Fortress and Call of Duty, albeit with more jack-in-the-box grenades and PVC pipe rocket launchers. Monolith is prepping the game for a download-only release (more's the pity, since I'd love a collector's edition with ample amounts of DC-related swag), and we should get our grubby little mitts on this potential gem sometime in mid-January. Gotham City Impostors is coming to PC, Xbox Live Arcade, and the PlayStation 3 storefront.

Let's get back to more traditional MMOs for a moment. I'm excited to learn more about Grimlands, a new third-person shooter set in an apocalyptic wasteland and purportedly offering more than just pew pew. The game's teaser trailer bills Grimlands as "the real shooter MMORPG," and the website mentions a flexible skill-system, a "comprehensive" crafting system, a dynamic gameworld, and modifiable vehicles. Sure, these could be standard marketing-speak bullet points, but imagine if the game actually delivers on one or two of them?

If that's not intriguing enough for you, the gameplay-heavy trailer looks sort of like a cross between Borderlands and Fallen Earth, and if the devs manage to blend the best parts of those two titles and marry it all to some solid shooting mechanics, they'll have something special on their hands. Oh, and did I mention the price is right? Grimlands will be published by noted free-to-play outfit gamigo.

Finally, we have Ghost Recon Online. I know, I know, it's not an MMO shooter (and neither are Gotham City Impostors, Tribes: Ascend, and many of the other titles I've covered and will be covering in The Firing Line). It is another free-to-play online shooter, though, and it's one of the few that has both a heavyweight publisher (UbiSoft) and a blockbuster game franchise backing it.

As with Grimlands, there's not a whole heck of a lot of info available on this title as of yet, but there's a built-in fan base here that isn't present in Grimlands, and though some people quibble with UbiSoft's penchant for milking its popular properties (yearly Assassin's Creed installments, anyone?), I'm of the mind that you can't have too much of a good thing when it comes to high-quality franchises.

If you're not familiar with Ghost Recon, it's a series of tactical shooter games centered around a fictional special forces squad conceived by author Tom Clancy. The online version will reportedly feature 8v8 action, clan tools, and cover-based gameplay.

And with that, my time is up. I'll see you next week and until then, keep aiming to misbehave.

The Firing Line's Jef Reahard has a twitchy trigger finger, a love of online shooters, and an uncanny resemblance to Malcolm Reynolds. OK, maybe not, but at least if he ever kills you, you'll be awake, you'll be facing him, and you'll be armed.
In this article: dc-comics, defiance, defiance-mmo, f2p, featured, firing-line, free-to-play, gamigo, ghost-recon, ghost-recon-online, gotham-city-impostors, grimlands, mmo-shooter, monolith, online-shooter, opinion, post-apocalyptic, previews, sci-fi, shooter, superhero, syfy, the-firing-line, trion, trion-worlds, ubisoft
All products recommended by Engadget are selected by our editorial team, independent of our parent company. Some of our stories include affiliate links. If you buy something through one of these links, we may earn an affiliate commission.
Share
Tweet
Share