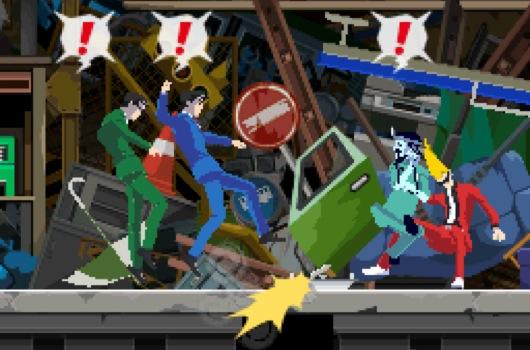 Ghost Trick: Phantom Detective
If you were interested in this game, but didn't buy it on DS because of faith that an iOS version would follow, I'm holding you personally responsible for the foundering sales of my favorite game of 2011. Live with that.

This came out in January, and I still have yet to experience anything so fresh, so unique, as Shu Takumi's side-scrolling adventure/puzzle game. Its comically unpredictable (but predictably comical) storyline cascades toward a twist that shouldn't work, its gameplay turns everyday objects like ceiling fans and globes into methods of both traversal and interaction, as you observe and influence the lives of a cast of bizarre characters from within their phone lines, headphones and wrecking balls.

I can't mention this game without mentioning its beyond perfect animation, which gave a jazzy flourish to every movement of every character. The act of serving chicken never seemed so stylish.

Super Mario 3D Land
Here's where I admit to something shameful: I don't like 3D Mario games. I also don't care much for the other kind of 3D, so I walked into Super Mario 3D Land with a near-fatal dose of skepticism. But what I found was the enclosed, tightly designed levels of a traditional Mario game, free of the constraint of two dimensions of movement.

After a long lead-in, I even found a series of challenging levels, which bested me countless times as I tried to complete them -- and then complete them again with Luigi, and find all three Star Medals.

Child of Eden
My colleagues were wowed by the experience of playing this game with Kinect, immersing themselves in the techno-organic dreamscapes and becoming part of the game, but I had no interest in that. When I played Child of Eden, I did so with a regular controller.

For me, Child of Eden wasn't a waking dream; it was a rail shooter, and a brilliantly designed one, with a variety of tricky enemies dancing across the screen. It's a different experience on a controller than with Kinect; with a controller, precision is both required and afforded; it's a bit more of a traditional game, but no less satisfying. Of course, it is uniquely beautiful no matter what controller you employ, with its Genki Rockets soundtrack perfectly matched to each level.

That Child of Eden can provide such different feelings from the same gameplay with two input methods is evidence of just how much thought went into that game.

El Shaddai: Ascension of the Metatron
No game I played this year cultivated a feeling of mystery as well as El Shaddai, whether it did so intentionally or not. It seems appropriate for a game based on religious text to give a sense of the unknowable, which El Shaddai accomplishes through deliberate means like a constant shift from one abstract art style to another, levels that abruptly end and drop you into a new place, and inscrutable character upgrades (you "earn" the ability to see a HUD after completing the game).

That otherworldliness is only enhanced by some of the more questionable decisions, like boss battles that sometimes don't seem to matter (but sometimes do!) and ground that is occasionally too abstract to see properly. I kind of agree with most people's criticisms of this game, but love the game despite them. It's the perfect B-game in that way.

Aliens Infestation
I'm not a hardcore Aliens fan -- I like the movies when they're on TV or whatever, but I don't own them or make detailed dioramas of my favorite scenes. What I am a fan of is Metroidvania-style games, and this one cleverly uses the utter hopelessness of the Aliens world to keep you from feeling as overpowered as you would in another such game. The license adds something to the genre that wouldn't be there otherwise.

The other thing it adds? Really creepy aliens. Developer Wayforward, for its part, brings its signature 2D art expertise and a group of quirky characters.

Yakuza 4 Maybe it's a guilty pleasure, maybe it's just a really good game. I can't even tell anymore. The characters in these games are just too over-the-top ridiculous to even judge properly; they're too tough, and their hearts are too golden, so even when they're being total creeps it's possible to temporarily suspend disbelief and buy that they're doing what's right.

This particular Yakuza features four guys like that, all total scum on the surface, but all doing everything they can to help everyone they can, all the time. Even loan shark Shun Akiyama is genuinely trying to help when he... puts a client to work in a hostess bar and makes her date him. That's still inexcusably creepy, but the protagonists are so altruistic that it's possible to believe he has good intentions even then.

Oh, and beating up everyone in Tokyo with street signs and bicycle wheels is super fun.

Professor Layton & The Last Specter
Every single time I start a Professor Layton game, I'm surprised by how much I like them. I always think of them as semi-pointless puzzle collections, but it isn't until I start a new one that I remember how inviting the atmosphere is, and how consistently wonderful the accordion-soaked musical accompaniment is.

The Last Specter benefited from what seemed like an extra coat of polish. And by acting as a prequel to the rest of the series, it brought new interest to the characters, including early indication of just why Professor Layton would seek the assistance of some random kid.

Bloodrayne Betrayal
Wayforward didn't exactly make me care about BloodRayne with this game, but it certainly made me not care that I was playing a BloodRayne game. I see shades of Astro Boy: The Omega Factor in BloodRayne: Betrayal, in the constant effort to dizzy or otherwise pacify one enemy while you dash away to deal with another. And any time I get anything near an Omega Factor feeling from a game, it's going to be one of the best experiences of the year.

I already mentioned Wayforward's art chops once in this writeup, but they're on display here in full HD. Quarrel
How good is Quarrel's board game design? It's a single-player-only board game, and I still loved it. I admit I'm looking forward to putting my anagram-building skills to the test in order to win territory from my friends, but I'm finding myself challenged quite enough by the AI.

Sure, that could be because I don't actually have any anagram-building skills, but I prefer to think it's because the AI is really sharp.

Solatorobo: Red the Hunter
If we couldn't get Mega Man Legends 3 this year -- and let's maintain our composure here -- CyberConnect2's high-flying, island-hopping adventure is a nice substitute. I made an effort to take this game slowly, treating it as a sort of vacation between other games. Whenever I wanted a break from something I was reviewing, I could take the dashing Red Savarin out on a mission to move some crates, or exterminate giant sea serpents, or whatever will get him a few bucks. Red treats his own world-saving quest much like I treat this game -- something to do between jobs.

I can't begin to guess how many times I was semi-tricked into playing just one more puzzle by Pushmo, which cleverly gives you the option to go straight into the next puzzle effortlessly after completing one. And should I somehow exhaust Intelligent Systems' store of built-in puzzles (I won't), there's an ever-growing supply of user-created puzzles just a QR code away.

Groove Coaster
Groove Coaster was perfectly suited for me from the beginning. It's a new music game (check!) by Space Invaders Infinity Gene creator Reisuke Ishida (check!), full of original music (check!) by Taito musicians (check!) and Space Invaders imagery (check!) I would have gladly put down $60 to import something like this back in high school after obsessively reading up on it, and now it's an impulse purchase on my phone.

Ishida found a way to keep a simple tapping-based music game interesting, by putting the tapped icons on a linear course that moves in and out of the screen, swirls around, and forms shapes, forcing the player to pay attention to both the movement of the course and the rhythm of the song.

Joystiq is revealing its 10 favorite games of 2011 throughout the week. Keep reading for more top selections and every writer's personal, impassioned picks in Best of the Rest roundups.
In this article: 3ds, aliens-infestation, best-of-the-rest-2011, bloodrayne-betrayal, child-of-eden, ds, El-Shaddai-Ascension-of-the-Metatron, ghost-trick-phantom-detective, groove-coaster, ios, iphone, microsoft, mobile, nintendo, playstation, professor-layton-and-the-last-specter, ps3, pushmo, super-mario-3d-land, xbox
All products recommended by Engadget are selected by our editorial team, independent of our parent company. Some of our stories include affiliate links. If you buy something through one of these links, we may earn an affiliate commission.
Share
Tweet
Share