BioWare teases the next 'Dragon Age' in a new trailer 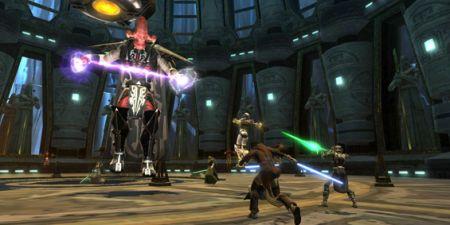 Star Wars: The Old Republic is the new hotness in massively multiplayer games, and I'm really enjoying playing a smuggler on my PC. But unlike Blizzard, which makes World of Warcraft and has had a long policy of releasing both PC and Mac versions on the same disc, BioWare (who makes SW:TOR, as the kids call it) hasn't released a Mac version of its new video game. But there is hope. The two doctors who run BioWare tell our friends over at Massively/Joystiq that having a Mac version of the game at some point is indeed important. "We know there's a big Mac audience of BioWare fans ... we know that's an important and large audience. And we want to serve that audience," says Dr. Ray Muzyka.

Unfortunately, he's not ready to serve that audience quite yet. You can play the game on a Windows-equipped partition, of course, but even though BioWare admits that's not the best way to do it, there are no official plans yet for a Mac port.

That's too bad. Not only is SW:TOR a great game, but we've heard in the past that Mac audiences aren't just important for sales, they're also good for promotion. Mac users tend to be more influential (not to mention vocal) online, so if you can get Mac users playing and liking your game, you often can see a boost in overall player interest as well. Hopefully BioWare will get this game out for the Mac very soon, and (like World of Warcraft) in a form that makes some good evangelists out of Mac users.

In this article: bioware, client, gamers, games, gaming, mac, mmo, port, Star Wars, star wars the old republic, StarWars, StarWarsTheOldRepublic, swtor
All products recommended by Engadget are selected by our editorial team, independent of our parent company. Some of our stories include affiliate links. If you buy something through one of these links, we may earn an affiliate commission.
Share
Tweet
Share