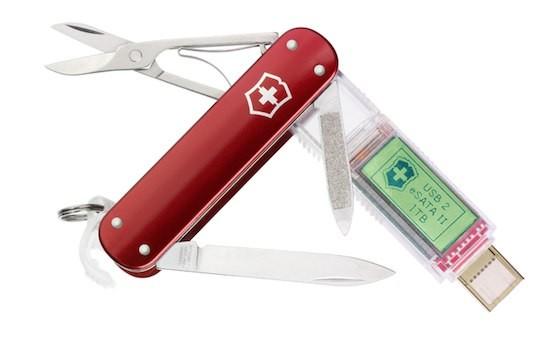 Shocker! Victorinox has officially pulled the wraps off of its latest pocket-knife and thumb drive combo here at CES -- you know, the one we spied just yesterday during the show-floor setup. Simply titled, SSD, the "pocket-sized drive" is apparently the only one in the world that connects to eSATA II / III and USB 2.0 / 3.0 with a single connector, and it's also being touted as the smallest one around. Furthermore, SSD features a 96 x 48 Bi-Stable monochrome graphic display for keeping track of what's stored inside of it, and Victorinox states that you won't find this on any other drive currently available. Impressively, you can expect up to 220 MB/s read and 150 MB/s write speeds, and you'll be able to encrypt all of your info with hardware- and software-based 256-bit AES -- not bad for something that fits on a key-loop, and packs a blade, scissors and a nail file! The SSD comes with a secondary flight-case sans utensils so you can get past security, and it'll be available in 64, 128 and 256GB flavors, not to mention a massive 1TB version.

The company's also taken the wraps off its Slim 3.0 USB drive, which is said to be up to ten-times faster than the previous model. There's no official word on pricing yet for either of the drives, but you can expect to be faced with a thin wallet when they hit shelves at some point this year. Hit up the press release after the break for more details.

The Victorinox SSD (Solid State Drive) and Victorinox Slim 3.0 USBs offer unprecedented data storage capacity with security measures fit for protecting the most confidential of personal and professional documents. Eachpocket-sized device packs anywhere from 16GB to one terabyte of storage capacity, is equipped to withstand a range of environmental and daily use factors, and remains true to the Swiss Army legacy of flawlessly designed products that endure.

"The Victorinox Swiss Army brand is synonymous with everyday "survival" tools and we continue to evolve our product offerings in the electronics division to provide solutions for living in a technology-focused world," said Andrea Huder, Head of Electronics for Victorinox. "The addition of the Victorinox SSD and Slim 3.0 to the flash USB line provides consumers with a quick and reliable way to store, transport and protect their personal and professional documents."

The need for large capacity storage devices has skyrocketed as consumers and businesses access, catalog and maintain thousands of data-intensive applications as part of their everyday lives. The Victorinox SSD addresses this opportunity by holding a terabyte of storage-the equivalent of 220 million pages of text, almost two years of uninterrupted music or 330,000 3MB photos in a pocket-sized device. Some key features and benefitsof the Victorinox SSD include:

Each SSD comes equipped with two knife bodies, between which the drive can easily be
interchanged-one is flight-friendly and the other includes traditional Swiss Army Knife implements
(blade, scissors, nail file/screw driver combo)

At the show, VSA is also unveiling a new limited-edition collection that makes the technology of three existing solutions visible to the eye. Each product will have a transparent knife handle, exposing the internal hardware, and will be complemented by clear cube packaging that gives the appearance of the device floating in suspension. VSA only produced between 1,000 and 4,000 pieces of each limited edition product, which will be available in April 2012:

Victorinox Secure-Featuring a removable USB flash drive with integrated biometric fingerprint
reader and loaded with proprietary Secure software, the device comes in 64GB and 128GB
capacities, and comes equipped with two knife bodies. The drive can easily be interchanged between
the flight-friendly body without implements and the non-flight model which includes scissors, blade,nail file with a screwdriver tip, and a combo LED/laser pointer

Victorinox Flash-Available in a 128GB capacity, equipped with flight and non-flight knife bodies, the Flash combines all the functionality of a Swiss Army Knife with a USB flash drive
VSA will be exhibiting at booth #36218, located in the South Hall of the Las Vegas Convention Center. CES attendees are encouraged to stop by to learn more about new and existing Victorinox Flash USB Memory devices, view interactive demonstrations-including our "Beat the SSD" challenge, and meet personally with Swiss Management and Victorinox Swiss Army founding family members.

For product fact sheets and high resolution images, visit the VSA online CES press kit. You can also follow them on Twitter @SwissArmy or on Facebook at www.Facebook.com/VictorinoxSwissArmy https://www.facebook.com/victorinoxswissarmy?ref=ts
In this article: ces, ces 2012, Ces2012, consumer electronics show, ConsumerElectronicsShow, esata, esata flash drive, esata ii, EsataFlashDrive, EsataIi, flash drive, flash storage, FlashDrive, FlashStorage, slim 3.0, Slim3.0, SSD, storage, usb, usb 2.0, usb flash drive, Usb2.0, UsbFlashDrive, Victorinox
All products recommended by Engadget are selected by our editorial team, independent of our parent company. Some of our stories include affiliate links. If you buy something through one of these links, we may earn an affiliate commission.
Share
Tweet
Share