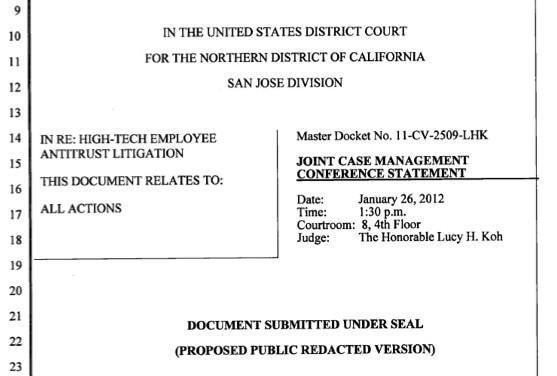 Back in 2009, a small controversy began swirling around Google and Apple, amid allegations that the two companies had struck an informal agreement to not poach each other's employees. The Department of Justice launched an investigation into the matter in 2010, but details of the case were only made public for the first time yesterday. TechCrunch was the first to sift through the documents, and has uncovered some ostensibly incriminating evidence against not only Google and Apple, but Pixar, Lucasfilm, Adobe, Intel, and Intuit, as well. According to filings from the US District Court for the Northern District of California, these companies did indeed enter "no poach" agreements with each other, and agreed to refrain from engaging in bidding wars. The documents also suggest that they collectively sought to limit their employees' power to negotiate for higher salaries.

Some of the most apparently damning evidence derives from archived e-mails, including one that Adobe CEO Bruce Chizen penned to Steve Jobs in May 2005. In the message, sent under the subject "Recruitment of Apple Employees," Adobe's SVP of human resources explains that "Bruce and Steve Jobs have an agreement that we are not to solicit ANY Apple employees, and vice versa." Pixar's Lori McAdams expressed similar sentiments in an internal e-mail from 2007, writing: "I just got off the phone with Danielle Lambert [of Apple], and we agreed that effective now, we'll follow a Gentleman's agreement with Apple that is similar to our Lucasfilm agreement." This would suggest, as the DOJ writes, that there's "strong evidence that the companies knew about the other express agreements, patterned their own agreements off of them, and operated them concurrently with the others to accomplish the same objective." The DOJ announced in September that it had reached settlements with the six implicated firms, but a class-action lawsuit is scheduled to get underway next week in San Jose.
In this article: adobe, anti competitive, AntiCompetitive, antitrust, apple, class action, class action lawsuit, ClassAction, ClassActionLawsuit, department of justice, DepartmentOfJustice, doj, employee, google, hiring, industry, intel, intuit, investigation, law, lawsuit, legal, lucasfilm, pixar, silicon valley, SiliconValley
All products recommended by Engadget are selected by our editorial team, independent of our parent company. Some of our stories include affiliate links. If you buy something through one of these links, we may earn an affiliate commission.
Share
Tweet
Share