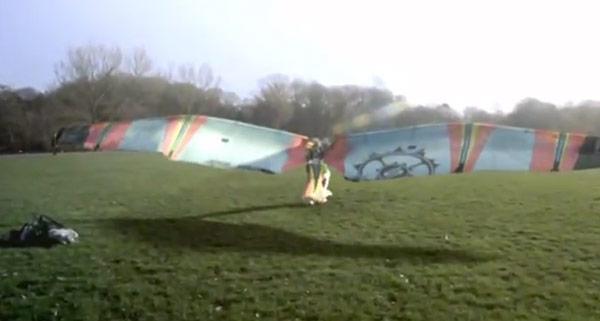 Just now catching up with the Human Birdwings project? Nice timing. The human flight machine -- built by Jarnos Smeets to rely on a Wiimote and Wildfire S, among other niceties -- has just enjoyed its first moments of liftoff. In essence, the wings were strapped onto a willing Earthling, and as he began to flap his arms... well, it's a sight you need to see to fully appreciate. We'll confess that the "flight" didn't last long, but Jarno himself told us that it was but a first "test run." Promising? Oh, yes. Head on past the break for the vid.

Update: The project here has been underway since at least August of last year, but we've requested raw footage of the test flight here to further justify concerns. We'll report back shortly!

Update: Shocker, it's fake. And that's that.

In this article: birdwings, diy, flight, fly, flying, hack, hacker, htc, human birdwings, HumanBirdwings, Jarnos Smeets, JarnosSmeets, mod, modder, video, wii, wii remote, WiiRemote, wildfire, wildfire s, WildfireS
All products recommended by Engadget are selected by our editorial team, independent of our parent company. Some of our stories include affiliate links. If you buy something through one of these links, we may earn an affiliate commission.
Share
Tweet
Share