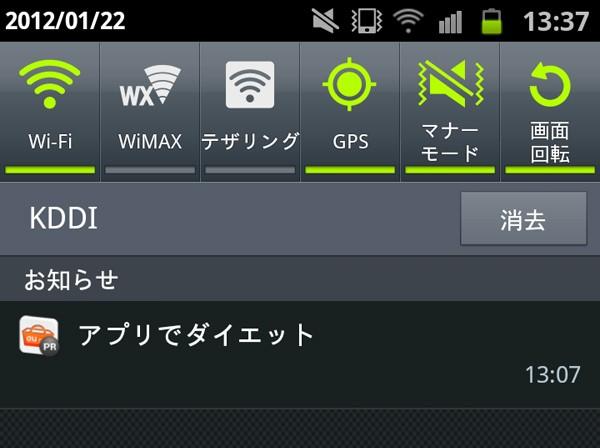 Imagine you're walking down the block when, suddenly, your phone goes off. You take it out of your pocket, unlock that sucker and pull down the notification bar to reveal... an ad! The idea of such a travesty is enough to make our blood (which is primarily just liquid caffeine and taurine at this point) boil. Disturbingly enough though, this isn't some terrifying dystopian Android future -- this is the reality for at least some KDDI au customers. The Japanese carrier bundles the au one Market on many of its handsets as an alternative to the standard Google offering, and a recent update to the third party app outlet has it sending ads as push notifications to users. It's similar to Airpush, a service that offers both push notifications and ads as homescreen icons, which suffered a serious backlash shortly after launching. Of course, the carrier market can't be removed (at least not without a little bit of hackery) which makes this a practically unforgivable offense. Oh, and a quick message to any American carriers considering a similar move: don't even think about it.
In this article: ad, ads, android, au one market, AuOneMarket, google, japan, kddi, kddi au, KddiAu, mobilepostmini, push ads, push notifications, PushAds, PushNotifications
All products recommended by Engadget are selected by our editorial team, independent of our parent company. Some of our stories include affiliate links. If you buy something through one of these links, we may earn an affiliate commission.
Share
Tweet
Share