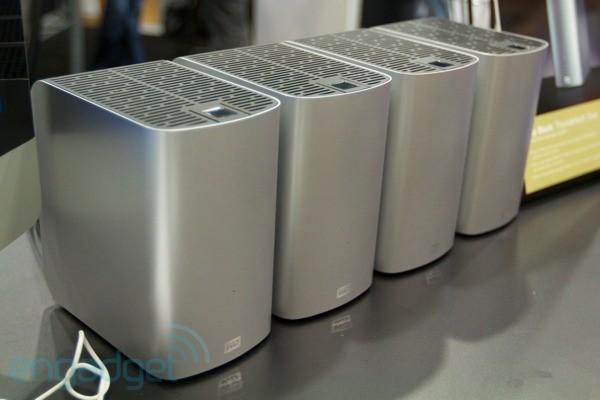 Here at Macworld 2012, Western Digital demoed a preview of their essentially finished, yet not final, MyBook Thunderbolt Duo. Scheduled to ship in Q1 for an "aggressive price," the unit plays host to two 3.5-inch drives, which'll come stuffed from the factory in either 4TB (2x 2TB) or 6TB (2x 3TB) configurations. On the outside, you're looking at the MyBook aesthetic you either love or loathe, but around back you'll find all connectivity has been gutted, save for power and two Thunderbolt ports. The latter means that up to six can be daisy-chained off one interconnect, which when setup in RAID 0 equates to rather speedy transfers, like 700MB/sec reads and 500MB/sec writes in the four-unit demonstration configuration we toyed with. And it's future proof too, as there's a door up-top which enables plebes to swap drives should the need arise. We'll keep an ear out for pricing, but until that day arrives, peep them in the gallery below, or in video form after the break.