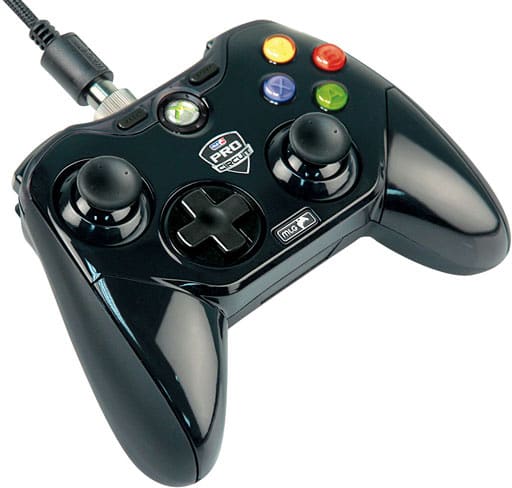 While most of us play games purely for their entertainment value, an elite few get their game on while calling themselves "professionals." These superstars of simulated battle make the rounds in various tournaments, including, most notably, Major League Gaming Pro Circuit championships. Now those digital athletes, as well as the masses of seasoned "amateurs," can compete with professional (or at least officially licensed) equipment -- we're talking about gear like Mad Catz' Major League Gaming Pro Circuit Controller for the PlayStation 3 and Xbox 360. This Major League gamepad promises to give competitive gamers a professional, customizable edge over their opponents with swappable "ProModule" thumbsticks and d-pads -- invoking the customizable spirit of Mad Catz' transforming RAT mouse. We gave the PlayStation 3 edition a chance to make its rodent cousin proud. Read on to see if it lives up to its professional branding. How would you rate the Major League Gaming Pro Circuit Controller?
We want to hear what you think. Post a quick review now to join the conversation!
Write a review

The Pro Circuit controller's retail packaging cradles the gamepad in a plastic molded display case, showcasing both a fully assembled precision gaming tool and a slew of swappable components. In addition to the glossy, stock PS3 parts already latched onto the controller's body, the visual feast includes a matte black faceplate, two additional thumbsticks, a pair of matching matte controller grips and a classic D-pad. The spare parts all have a distinctive "Xbox" style, responding to the pre-installed convex PS3 thumbsticks and separated D-pad with a pair of analog offerings rocking a concave top and a classic, solid crossbar directional pad.

Behind the controller's molded plastic packaging we found the unit's 3-meter detachable braided USB cable and a padded carrying case. The case feels about as protective as a cardboard lined plush zipper case can, but it lacks the premium feel of the controller itself. A pair of velcro walls allow you to compartmentalize the soft lunchbox to carry your controller and its spare parts.

The controller itself apes the shape of Microsoft's premiere gamepad, closely mimicking the curves, grips, triggers and shoulder buttons of the Xbox 360 controller. There are important differences, of course -- the gamepad's face can be rearranged to imitate the PlayStation 3 and Xbox 360 controllers, a mixture of both, or even odd customizations featuring two directional pads and one joystick. The backside is a bit different too -- where one might normally find a battery pack, the MLG Pro-Circuit has a weight compartment, allowing users to bog the unit down with up to two 25 gram (1.23 ounce) weights. The lack of battery means exactly what you'd think it does: this puppy is on a leash. Mad Catz says using a wired USB cable will combat input latency and accidental disconnections -- we're the first to sing the praises of wireless peripherals, but we can't blame a professional controller for not taking any chances. Besides, if you're going to tie a controller down, we can't think of a nicer tether than the MLG Pro Circuit's three meter braided USB cable. A threaded end ensures the premium feeling wire won't yank out of your controller mid-game.

So, you can swap and replace the controller's joysticks and directional pads -- but are they worth switching out? For the most part, component use is a matter of preference -- the convex "PlayStation style" thumbsticks don't provide a significantly different level of tension than the "Xbox style" concave sticks, although Mad Catz says additional ProModule kits will eventually give users additional options in color, texture, sensitivity and even stick length / height. The included thumbsticks offer a bit more tension than the Xbox / PlayStation stock controllers, but are still very responsive.

The controller's modular D-pads are a bit less equal, each with their own flaws. The PS3 style "island" D-pad, for instance, registers diagonals quite easily -- but lean your thumb hard to either edge of any given direction, and you may find yourself hitting that diagonal unintentionally. The classic, solid crossbar D-Pad on the other hand has less trouble with directional drifting, but hitting those diagonal inputs can be difficult. Although the PS3 style pad seems to be better balanced of the two, neither of them overshadow the pads they emulate.

Switching out the modular components is simple, and even kind of fun. Five tiny magnets hold the controller's faceplate down, securing it well enough that it doesn't detach on its own, but making it easy to peel off. Sticks and pads are removed with a simple twist to the left, unlocking them and allowing them to be lifted out. There are some limits to configuration however -- we found that having multiple thumbsticks on the controller's left simply didn't work, although dual d-pads had no problem playing nice together. The directional pad components are physical blocked from taking up residence the rightmost modular compartment, and the controller offers no way to re-assign left / right stick functionality. This shouldn't affect most gamers, but players dedicated to playing southpaw won't find the left-handed holy grail here.

The gamepad's four primary face buttons aren't swappable, but feel good enough that we don't feel like we'd want to replace them, even if we could. Like the controller's body, its face buttons mimic the poppy buttons of the Xbox 360 controller, but lay just a little flatter than their model's bubbly buttons. The shoulder bumpers and triggers echo Microsoft's pad as well, although L1 / R1 bumpers offer a hair more resistance and are significantly louder to depress. The triggers are a little closer to the finger-pulls they hope to flatter, and quietly depress with a just a little less resistance. Despite the excessively clicky bumpers, our index fingers felt very comfortable on the controller's edge.

Although it's not clear right away, the gamepad's PS3 variant has a killer exclusive feature: trigger swapping. Strangely absent from the peripheral's manual, this handy trick predictably swaps the functions of the controller's trigger and shoulder buttons, allowing L1 and R1 to take the place of L2 and R2 and visa versa. This feature is invaluable to PS3 gamers who dislike the console's tendency to swap the trigger controls on multiplatform titles, allowing them to manually remap a game's shoulder buttons to match the layout its Xbox 360 brethren. Holding the kit's start and select button for several seconds makes the switch, inverting the gamepad's controller assignment indicator lights to notify the user the swap is active. We long ago adjusted to the PS3's tendency to put its own floppy triggers in the secondary position, but being able to make the switch on the Xbox aping MLG Pro-Circuit just felt right. We can easily see this feature being a selling point for many gamers -- which makes it all the more strange that it's left out of the PS3 edition's manual.

Although our review unit is a PS3 controller by trade, it did a passable job moonlighting as a PC gamepad. Windows instantly recognized the controller as the "MLG GamePad for PS3," a 13-button dual analog controller with an 8-directional D-pad. We used a few different button mapping programs to get the controller up and running with a variety of PC games, although none of them recognized the unit natively. It didn't adopt any of our machine's previously configured PS3 controller profiles either, but as it classifies itself as a different controller, that's not unexpected.

Despite its (very welcome) trigger swapping magic, Mad Catz' MLG Pro-Circuit has some rather jarring flaws for what is considered a premium, "professional" gaming controller. Put bluntly, it's missing features when compared to a standard PlayStation 3 controller. Looking for Sixaxis? You won't find it here -- the gamepad's very own manual notes its absence, also mentioning that pressure sensitivity for the controller's L1 and R1 buttons is gone as well. We'll admit, Sixaxis control probably doesn't have a strong foothold in tournament play, but when a peripheral breaks the Benjamin Franklin price barrier, we don't expect to lose features. The Pro-Circuit controller has also dropped force-feedback, an omission that Sony itself was guilty of with the original PS3 Sixaxis controller, eventually remedied by the introduction of the DualShock 3. Again, it can be argued that vibration could be distracting in tournament play, but the average gamer looking for a premium controller may prefer the tactile feedback to the tactical advantage.

If you're looking for other MLG licensed gamepads, you'll hit a brick wall pretty quick -- but there are a few other options available for the competitive gamer. The Razer Onza Tournament Edition may not have the Pro-Circuit's swappable sticks, but resistance adjustable thumbsticks and multifunction buttons are a pretty hefty helping of customizability at a mere $50. On the other hand, the Onza is Xbox exclusive, leaving PS3 owners in the lurch; its button mapping features also disqualifies it from use in many MLG tournaments. If professional play isn't your concern, there's a whole host of themed controllers and quirky attachments that can keep your gaming experience fresh.

Is Mad Catz' MLG Pro-Circuit controller the professional kit it promises to be? Well, it meets MLG tournament requirements, and it's definitely a solid-feeling gamepad. Its Xbox-style design feels familiar and comfortable, and its modular sticks and pads give it a unique air of customizability. For a premium ticket price of $100, however, we feel like the rig's directional pads could be stronger, and the PS3 edition's loss of Sixaxis control and pressure-sensitive L1 and R1 buttons is perplexing. Although the exclusion of force feedback can be painted as reasonable, it doesn't feel so in practice -- our hands were unshaken, and that seemed, well, wrong.

On the other hand, the unit feels solidly built, betrayed only by the gamepad's extra-clicky shoulder buttons. The PlayStation 3 edition's exclusive trigger-swap trick is a boon as well, and could be enough to warrant the sticker price for some of the PS3's pickier players. In the end, the MLG Pro-Circuit is a pretty satisfying gamepad, though it may be a better purchase for gamers playing on an Xbox 360 than for the average PS3 owner. Yes, it fulfills all of those niggling MLG tournament requirements, but the feature loss between the two versions is much greater for the PlayStation 3 user. It comes down to a personal decision; will the loss of Sixaxis, a feature you probably don't use that much anyhow, nag at your lighter wallet -- or will you bask in your PS3's new, more-than-adequate Xbox 360 controller substitute? What's $100 worth to you? Take a break, think about it over a few rounds of Killzone and get back to us.
In this article: mad catz, MadCatz, major league gaming, MajorLeagueGaming, MLG, mlg pro, mlg pro-circuit, MlgPro, MlgPro-circuit, peripheral, peripherals, playstation 3, Playstation3, pro gamer, pro-circuit, professional game controller, professional gaming, ProfessionalGameController, ProfessionalGaming, ProGamer, review
All products recommended by Engadget are selected by our editorial team, independent of our parent company. Some of our stories include affiliate links. If you buy something through one of these links, we may earn an affiliate commission.