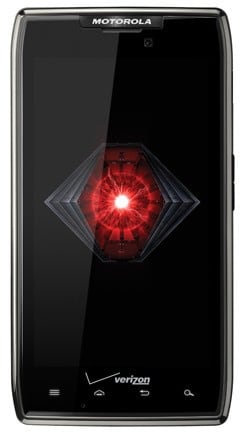 Most of today's smartphones, especially those of the LTE-enabled persuasion, have earned a bad rap for exceptionally bad battery life, with large displays and hungry radios that suck the juice out faster than a three year-old can down a CapriSun. The race to construct the thinnest phones on the market doesn't help much either, since whittling down handsets results in less space for generously sized battery packs. The Motorola Droid RAZR is currently the slimmest phone this side of the Pacific, offering a thickness of 7.1mm at its thinnest end, and the title likely won't hold for long as new phones like the Huawei Ascend P1 S aim to knock the RAZR off its throne. But at what point do we stand up and insist on adding a little extra heft for the sake of having a bigger battery?

Droid RAZR review
Droid RAZR Maxx available now
Droid RAZR Maxx hands-on at CES
Enter the Motorola Droid RAZR Maxx. A mere two months after its predecessor was released on Verizon, this new contender came around to challenge the battery life of every single next-gen phone we've ever used. Its back end has been filled out somewhat to make room for a bigger battery, but at 8.99mm, it's still slimmer than a huge number of competing handsets on the market today. So what makes the Maxx different from the RAZR? Is it worth paying $300 with a two-year commitment -- a $100 premium over its original? Read on to find out. If you're a power user, you'll have no choice but to go with the RAZR Maxx's superb battery.

How would you rate the DROID RAZR MAXX?
We want to hear what you think. Post a quick review now to join the conversation!
Write a review

The Maxx looks like original Droid RAZR would if it made a trip through a maze of funhouse mirrors. Realistically, the two are complete twinners in every way but one: the Maxx measures 8.99mm at its thinnest point, while the RAZR's much slimmer at 7.1mm thick. In reality, a difference of 1.9mm doesn't seem to be that much -- and we agree. But in the mobile world, however, it's the thinnest devices that reign supreme and ultimately earn ultimate bragging rights.

The Maxx cuts a skinnier profile than the iPhone 4S and Galaxy Nexus on Verizon.

The Maxx isn't looking to win that title, but it still shouldn't be considered bulky by any means. After all, at its thinnest, it cuts a skinnier profile than the 9.3mm-thick iPhone 4S and the 9.47mm Galaxy Nexus on Verizon. Granted, the Maxx still sports the same 10.6mm-thick hump as you'll find on the original RAZR's back cover, though this time around, the slope running up from its thinner end is less pronounced. And frankly, we don't mind the dimensions one bit. We understand that thin is in, but the heft makes for a much more comfortable grip.

The Maxx is also a smidge heavier than its 4.48-ounce (127g) predecessor, tipping the scales at 5.11 ounces (145g). Again, this is definitely manageable and still bests the Galaxy Nexus. This begs the question, though: why does it matter that this phone is slimmer and lighter than Sammy's flagship ICS device? Because the entire reason the Maxx exists is to accommodate that mammoth 3,300mAh battery built inside to deliver superb battery life. We'll do a deep dive into the performance later, but the fact that the thicker and heavier Nexus uses a smaller power pack goes to show that there is no more excuse for poor performance in this category. If Motorola can push out stellar results in such a thin profile, why can't HTC or Samsung?

Let's not overlook one key factor here, which is the lack of a user-removable battery. Certainly Motorola had to make a few concessions in order to cram more stuff into less space, and a battery cover missed the cut. With such a lengthy talk time, most people won't blink an eye at this, and we feel the same way. We had plenty of concern with the first RAZR, since we knew enough people would find a genuine need for an extended battery, but being stuck with such a large juicepack on the Maxx won't be quite as frustrating for heavy users.

Aside from the larger battery and plumper profile, the Maxx has the same specs and design as the original RAZR. Leave that out of the equation and you'd be hard-pressed to tell the difference between the two of them. The ports are all in the same place, the lackluster PenTile qHD display is left unimproved, the firmware and cameras remain unchanged and the hardware itself is still fashioned out of tough materials like Kevlar and Gorilla Glass. To learn all the fine details about what makes the two RAZRs tick, check out our review on the original version.

It's a slap in the face to power users that bought the RAZR but would've waited for the Maxx had they known it was coming.

This feels like a slap in the face to power users that purchased the original Droid RAZR during the holidays but would've waited for the Maxx had they known it was coming in two months. The situation isn't dissimilar to the ruckus AT&T caused by announcing three versions of the Samsung Galaxy S II -- the GSII, Skyrocket and Skyrocket HD -- within a span of four months. On one hand, we can definitely and relate to the frustration. On the other, such rapid turnover has turned into standard practice in the US, a cautionary tale to keep in mind when buying a phone. Will this handset serve your needs, regardless of what may come to market over the next 18 to 24 months?

We suppose it could have been worse for heavy-hitting RAZR owners if Moto and Verizon made improvements to other components as well, but that's exactly what the two companies should've done. More specifically, we were disappointed that the qHD display was left untouched, and would've enjoyed seeing a 720p HD panel get tossed in to help the Maxx match wits against the Galaxy Nexus.

Two words: holy smokes. We took the phone off the charger at 8:30 AM, began our standard video rundown test that consists of an endless video loop while connected to 3G, walked away and waited. And waited. And continued waiting until 1 AM the following morning. That's right -- the Maxx lasted 16.5 hours playing the same video over and over before giving up the ghost. Running the same test on the original Droid RAZR yielded nine hours of battery life, which is respectable, though nowhere near this impressive. We charged up the Maxx again, used it moderately for a full day and a half and the phone was still at 40 percent. The next morning we awoke to find the Maxx was still sitting pretty at 20 percent. Had we left Smart Actions turned on, it likely would have saved us even more juice. In other words, it lasted a solid two days with moderate use before it cried out for another charge. We'll update with more results as they come, as LTE tests are still in progress. Update: the results are in, and the RAZR Maxx lasted a solid 11 hours and 25 minutes in our standard video rundown test when using LTE.

The Maxx lasted 16.5 hours on our video rundown test, and a solid two days with moderate use.

We expected the Droid RAZR Maxx's 3,300mAh battery to last us a long time, and we were aware that the talk time for the phone is rated at 21 hours. But interestingly enough, despite the fact that the battery life didn't last as long as advertised, we still found ourselves in awe, wondering where this phone had been our whole lives.

As with the Droid RAZR, the Maxx sports an eight megapixel rear shooter and 1.3MP front-facing camera. As mentioned before, the sensors are identical to the previous phone, and as such don't expect to see many different results here. Colors are still muted in direct sunlight, it struggles in low-light situations and indoor images are once again a bit noisy. We were pleased to see only a limited amount of shutter lag, thanks to the phone's continuous autofocus feature. Panorama shots were hit-or-miss, with nearly a half of our images not even merging together without looking blurry or disjointed. 
As ever, the 1080p video capture is above average. Granted, we still experienced a little bit of compression, but everything was crisp and the movies we made were perfectly fluid. The camcorder is set to 720p by default, so you'll need to go in and manually switch it up the first time. However, when we used the lower resolution we were still pleased with the results.

We won't dive into a whole lot of detail here, because frankly there isn't much to give this time around that wouldn't be directly copying our review of the original Droid RAZR. Why? Because the two phones run virtually the same ROM, build and skin. Using the RAZR and the Maxx side-by-side, we came to an interesting realization: nothing about its firmware is different from its mentor. There is no new firmware build, no nifty tricks added in for the heck of it and no improved specs. When we mentioned earlier that the Maxx really is the OG RAZR with an extended battery built inside, we were speaking quite literally.

The Droid RAZR Maxx may deliver a lifetime of mammoth proportions, but we can't help but have mixed feelings. Why? As too often is the case (the Samsung Skyrocket series on AT&T comes to mind), Motorola and Verizon are hard at work pushing too many RAZR devices at once, and early adopters are left as the victims. We're sure there were a few people that purchased the original phone because they were bedazzled by its incredibly thin profile, but how many owners would much rather have a device that's still very reasonably svelte and offers astronomically superb battery life?

How many of us would love to have a device that's reasonably svelte and still offers superb battery life?

Power users who need to have the longest lifetime possible will have no choice but to pick it -- a notion that's just cause for disappointment. At its worst, it's an original RAZR with a $100 extended battery pack attached. At its best, however, the Maxx is proof to every phone manufacturer that it really is possible to make a slender (and absolutely stunning) device that can actually survive more than a full day's worth of heavy use. So what does the Maxx really offer to the rest of the mobile community? A sense of optimism.