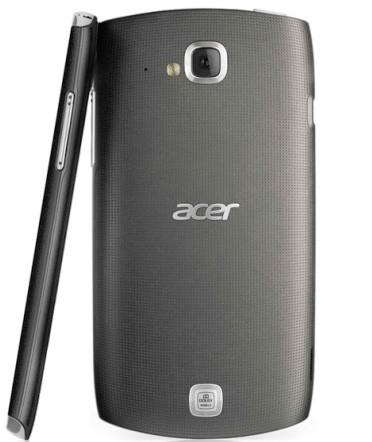 Sometimes, you're just so darn full of pride you can get lost in the moment. We assume that's what Acer's done, having revealed possibly its trump handset weeks before the global mobile event, MWC, even starts. Its CloudMobile has won the iF design award for 2012, and the company just wanted everyone to know. So what can we expect to see later this month? Well, the phone will pack a 4.3-inch high-definition touchscreen, with a Dolby-branded speaker plate on the back, all wrapped in a sub-10mm "Sleeve DNA" contoured shell. Expect the device to be tightly integrated with Acer's cloud technology -- we grabbed a hands-on with this just last month -- using peer-to-peer connectivity to sync pictures, music and other files, while also offering up printer functionality. Pocket-Lint believes we'll see the device running Android 4.0 on arrival -- it's currently posited for a Q3 release. We'll be scouring the show floor for it when Mobile World Congress kicks off in earnest.

TAIPEI, TAIWAN (February 10, 2012) - The Acer CloudMobileTM smartphone has just received the iF design award 2012, in recognition of outstanding achievement in design.

Acer CloudMobileTM is the first smartphone to offer AcerCloud technology, which securely connects personal content from Cloud PCs through CloudMobileTM anytime, anywhere. Users can push thousands of photos to and from CloudMobileTM and listen to their entire music collection whether at home or on the go.

Designed to showcase Acer's most advanced technology, Acer CloudMobileTM is ultra-slim with a depth of less than one centimeter. Its Sleeve DNA design has soft, wrapping contours which enhance the handheld experience.

The stainless steel receiver on the front, and the Dolby speaker plate on the back, have tiny perforation that exude style and high-quality craftsmanship. Tactile details on the volume button and rear side of the phone further enhance the exquisite look and feel. A narrow bezel slims Acer CloudMobileTM down, while still providing room for a 4.3-inch fully laminated HD display.

Organized by the International Forum Design of Germany, the iF awards have been held since 1953 and are regarded as an indicator of outstanding quality in design.

An international panel of experts judged on numerous criteria including design workmanship, choice of material, environmental compatibility and functionality. According to iF, participation in the iF design awards demonstrates the will to innovate and the courage to be compared next to others in competition.

Acer smartphone design has been awarded for its innovation the last two years in a row (Iconia Smart S300, 2011 Computex Design & Innovation).

The Acer CloudMobileTM smartphone will be unveiled at the end of February 2012 at the Mobile World Congress exhibition in Barcelona, Spain, and will be available in Q3, 2012.

Since its founding in 1976, Acer has achieved the goal of breaking the barriers between people and technology. Globally, Acer ranks No. 2 for notebook PCs. A profitable and sustainable Channel Business Model is instrumental to the company's continuing growth, while its multi-brand approach integrates Acer, Gateway, Packard Bell, and eMachines brands in worldwide markets. Acer designs environmentally friendly products and has established a green supply chain through collaboration with suppliers. Acer is proud to be a Worldwide Partner of the Olympic Movement, including supporting the Vancouver 2010 Olympic Winter Games and London 2012 Olympic Games. The Acer Group employs 8,000 people worldwide. Revenues for 2010 reached US$19.9 billion. Visit www.acer-group.com for more information.
In this article: 4.3-inch, acer, acer cloudmobile, acercloud, AcerCloudmobile, cloudmobile, dolby, if design award, IfDesignAward, mobilepostcross, mwc 2012, Mwc2012
All products recommended by Engadget are selected by our editorial team, independent of our parent company. Some of our stories include affiliate links. If you buy something through one of these links, we may earn an affiliate commission.
Share
Tweet
Share