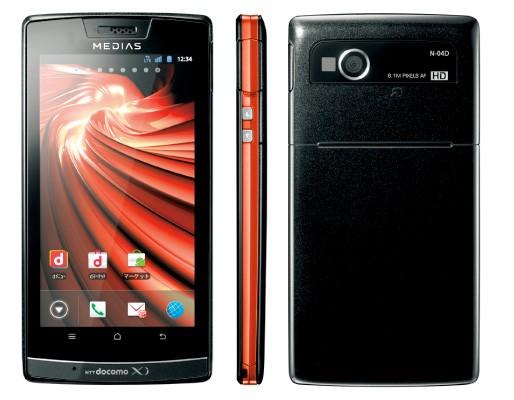 It was mere weeks since we saw NEC's last smartphone that will probably never take the plane ride away from Japan, but contrary to its recent financials, the company doesn't appear to be letting up. The NEC Medias LTE N-04D, arriving on NTT DoCoMo, is a little chunkier than its predecessor, but that 11.6mm shell manages to squeeze in 4G connectivity and a 1.2 GHz dual-core processor Along LTE credentials, the specification reads like the majority of Medias phones we've already seen recently. This includes a waterproof shell, 4.3-inch 720p LCD screen, mobile wallet and TV tuner. It'll also join the handful of smartphones compatible with Casio's Bluetooth-connected G-Shock, adding mail and call notifications to your wrist. The phone will arrive February 15th in the tangy orange and black guise seen above. Japanese residents can now preorder theirs (while the rest of us gaze on wistfully) at the source below.
In this article: Android, android gingerbread, AndroidGingerbread, DoCoMo, Gingerbread, Google, Japan, LTE N-04D, LteN-04d, Medias, mobilepostmini, n-04d, NEC, NEC Casio Medias LTE N-04D, NecCasioMediasLteN-04d, NTT, NTT DoCoMo, NttDocomo, thin, thinnest, Thinnest Phone, ThinnestPhone, waterproof
All products recommended by Engadget are selected by our editorial team, independent of our parent company. Some of our stories include affiliate links. If you buy something through one of these links, we may earn an affiliate commission.
Share
Tweet
Share