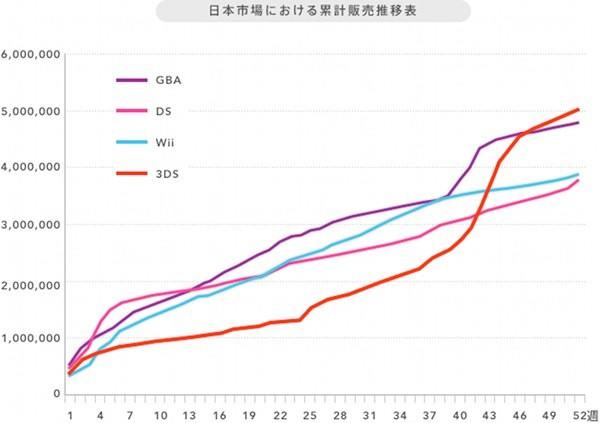 While it had a rocky moment in the middle, some heavy price-cutting and top-drawer games helped the system sell five million within a year in its native homeland. According to Nintendo, these are legitimate sell-through figures and as predicted, make the 3D-capable console Nintendo's fastest selling console to date. You can take a look at some (translated) self-congratulatory backslapping from Nintendo below.

(Minami-ku, Kyoto, President Satoru Iwata) is that the sales in the Japanese market released February 26, 2011 "Nintendo 3DS" will continue to holiday shopping season, was also favorable since the new year yesterday, Nintendo Co., Ltd. At the time (February 19), the sales data was obtained directly from our domestic distribution companies, the estimated cumulative sales (sell-through) is pleased to announce that more than 5 million units.

Estimated cumulative sales in the retail market so far (according to Media Create), the achievement of 500 million, the release date, was 58 weeks in the "Game Boy Advance" at week 56 in the "Nintendo DS" Company, " Nintendo 3DS "is higher than these, and less than 52 weeks per year, has become the fastest achievement of the past as a game platform of the Japanese market.

The future, through the proposal of new software, we aim to spread further.
In this article: figures, gaming, handheld, handheld console, handheld gaming, HandheldConsole, HandheldGaming, Japan, Japanese Sales, JapaneseSales, Nintendo, Nintendo 3ds, Nintendo3ds, numbers, sales, statistics, stats
All products recommended by Engadget are selected by our editorial team, independent of our parent company. Some of our stories include affiliate links. If you buy something through one of these links, we may earn an affiliate commission.
Share
Tweet
Share