B. Drawbaugh
February 23rd, 2012
In this article: atsc, Broadway, Hauppauge, Hauppauge Broadway, HauppaugeBroadway, hdpostcross, PlaceShifting, review
New ways to watch TV, we're always looking for 'em. New products for you to buy, companies are always trying to make 'em. The two aspirations converge with Hauppauge's latest product, Broadway. The idea here isn't exactly novel, but with few exceptions Sling Media has been left to dominate the placeshifting category. The Broadway picks up where Sling kicked off, adding WiFi and more interestingly, shedding the need for costly clients, instead using a built-in web server to access the live video streams. Interesting idea, sure, but is it actually useful and worth the $199 it demands? We hope to reveal just that, after you click through of course. 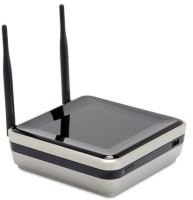 At less than two pounds and with two antennas in tow, the Broadway looks like a WiFi router, but with a handful of inputs on the back instead of the usual array of network jacks. In addition to the standard-def video and analog audio sockets, there's an RF coax input and an IR output. There are also two USB ports on the front and back for "future applications" -- make of that what you will. The single Ethernet jack can be used if you have a wired network, or simply for the purposes of the initial setup if you wish to use the antennas to connect to your 802.11g/n wireless network.

What's missing is HD analog video inputs or an HDMI-in socket. There are also no outputs, which means you can't use this in a man-in-the middle configuration like with a Slingbox. There's an IR port that can be used to control something like a set-top box, but that use case seems secondary here. The feel of the hardware is not one we'd describe as premium, per se, but we won't hold that against the Broadway, as it's really meant to be hidden away or mounted on a wall. The external power supply is pretty run-of-the-mill. There's also a power button up front, but we're not sure why you might turn this off in the first place.

For most people, installing the Broadway will be as simple as plugging in a coax cable, power, network connection and pointing your browser to http://distan.tv where the magic of network discovery takes care of the rest. During the initial software setup you can change the default password ("admin") and pin of ("0000') to credentials that are more difficult to guess. You'll also be asked to specify the TV provider, as well as the source of the video you'll be streaming. Afterward, you can set the desired quality level to one that your network can accommodate both locally and via the internet.

One area where the setup falls short is helping you configure your router to expose your streams to the internet. Where another company might have leaned on UPnP to automatically poke the required holes in your firewall, the quick start guide simply tells you which port you'll need to forward. This isn't really that difficult and something many home theater enthusiasts have already had to master. We were thankful we were able to change the default listing port from 80 to anything we wanted, which provides some security through obscurity, as well as allowing us to get around Verizon's draconian inbound blocking of the internet's favorite web port. Finally, we registered with Hauppauge's distant.tv and were provided with a complex-looking shortcut we can save and share for easy access locally or abroad.

We use the term "software" loosely here as there's nothing to install on your computer, phone or tablet. (There is the optional TVCenter for the PC, though.) Instead, you'll use your favorite web browser to stream live TV on your local network or over the internet. Yours truly didn't have a problem navigating our way around a custom list of favorite channels on our computer, phone or tablet. The interface is innocuous enough and fairly simple, but beyond setting a list of favorite channels there isn't much to it. You can use either H.264 or Flash to stream, which ensures you can watch live TV on almost any device. Oddly, though one of our channels showed up with the corresponding logo, the rest didn't. And while you can filter out the channels you don't want, they show up with just the call letters, not the network (WEDU, for example, instead of PBS), so if you're used to the channel numbers you'll need to learn the call letters.

Annoying, that, but what's really missing is program information. A simple list of shows that are on right now would go a long way, and with PSIP information being accurate most of the time we see no reason Hauppauge should leave this out. Hauppauge tells us an update coming in March will add free program data via PSIP, as well as the ability to record to USB-attached storage -- we assume this will also make it possible to search for shows instead of just channel call letters.

Once you find something to watch you can view it in a window or at full-screen, but there's no breakout option, and takes close to ten seconds to change channels. On iOS devices, the basic included video player lets you pause, but the rewind buttons don't work. Only one person can watch at a time, and if a second viewer tries to connect, the whole stream simply fails without explanation. (For such situations, you can set a pin to prevent unauthorized interlopers from viewing.) Speaking of the stream, the quality is really good, even over 3G, and in many cases it's better than we've come to expect from our Slingbox. Still, it wasn't as resilient when the throughput dropped.

If you've been looking for a way to watch live TV on the go and the Slingbox's per-client cost rubs you the wrong way, this might just be the streamer you're looking for. Being limited to just ATSC or ClearQAM is probably the key drawback preventing the Broadway from being a runaway success. Still, limited use cases and value proposition aside, the Broadway just works, and offers some unique features and functionality that should be greatly appreciated among the niche it's designed to serve.