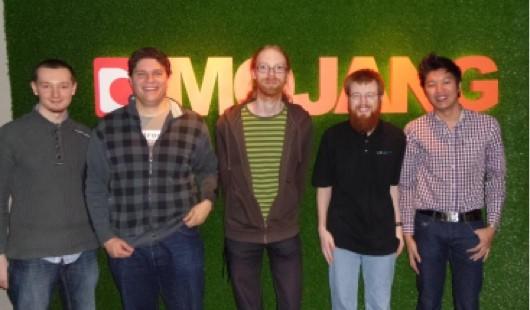 The four main developers behind Bukkit, a popular set of unofficial modifications for Minecraft servers, have been hired on by Mojang, makers of the uber popular block-world simulator. Mojang says Warren Loo, Erik Broes, Nathan Adams and Nathan Gilbert will join the company to update Bukkit and make it more compatible with the next version of the game, and to enable support other server mods in the future.

Loo writes on the official forms that the team will basically redesign the game's API, which means unofficial developers everywhere will be able to hook into the game's mechanics much more easily and smoothly. Mojang points out that there are a few teams that have made popular mods for the game, including Spout and Forge, but the Bukkit team was chosen because they've developed specifically for Minecraft servers. The plan is to have them working on "more than just modding."

Obviously, the gentlemen are quite excited about joining the Mojang guys. That tends to happen when a company whose game you work on for free decides to start paying you in real money.
In this article: acquisition, bukkit, hires, Minecraft, mods, mojang, pc, server, servers
All products recommended by Engadget are selected by our editorial team, independent of our parent company. Some of our stories include affiliate links. If you buy something through one of these links, we may earn an affiliate commission.
Share
Tweet
Share