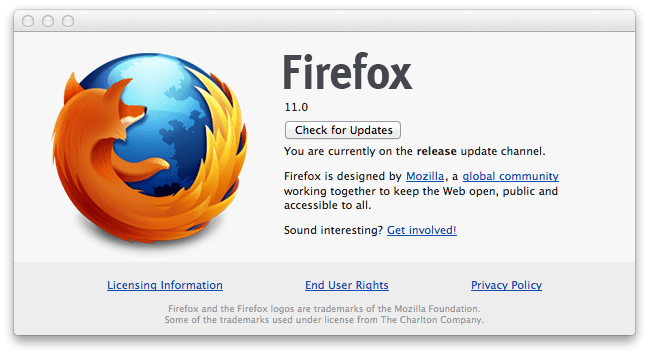 It's only been a few weeks since the celebrated tin anniversary of Firefox hit the virtual streets, and now it's taken on another numerical increment. Alongside the fullscreen apps and promises of fewer crashes from version 10, Firefox 11 now allows you to migrate history, bookmarks and cookies over from rival Chrome. Additionally, you can now sync extensions between your computers. On the dev side of things, you'll have access to Style Editor for CSS tweaks, file storage in IndexedDB and SPDY protocol support for speedier page loads. Eager to take it for a spin? Check your browser for the updated goods or get it directly via the source link below.

[Thanks, Robert]
In this article: browser, firefox, firefox 11, Firefox11, internet browser, InternetBrowser, mozilla, mozilla firefox, mozilla firefox 11, MozillaFirefox, MozillaFirefox11, refresh, update
All products recommended by Engadget are selected by our editorial team, independent of our parent company. Some of our stories include affiliate links. If you buy something through one of these links, we may earn an affiliate commission.
Share
Tweet
Share