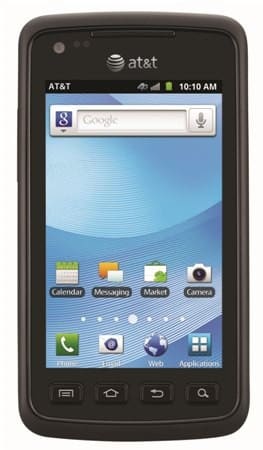 Not every smartphone stakes its claim on speedy processors, huge gorgeous screens or slim and sexy physiques. Some take a relatively modest set of specs and add a little wrinkle to make them stand out from the crowd. The Samsung Rugby Smart is one such device. Though it adds Android to what we'll now refer to as the Rugby Dumb, we can already tell you this handset isn't for the spec snobs among you. But, if you're more concerned with durability and tank-like construction, you might want to stick around a while. This AT&T-branded phone is built to mil-spec 810F standards, meaning it's shockproof, dustproof and can be immersed in up to a meter of water for up to 30 minutes. If these are qualities you desire in a phone, meet us past the break to see how it stacks up against its competition. The Rugby Smart is clearly the best option in its class. Unfortunately, being the top rugged smartphone doesn't mean much.

Be the first to review the Rugby Smart?
Your ratings help us make the buyer’s guide better for everyone.
Write a review

The Samsung Rugby Smart is easily the sleekest of the supposedly military-grade smartphones we've laid hands on... at least since the Motorola Defy. That's not saying much, though. The field isn't particularly crowded, and compared to phones like the G'zOne Commando, even a brick would seem like an ergonomic miracle. At 12.19mm thick the Rugby is hardly svelte, but it's almost a full 3mm thinner than the Commando. (To give you some perspective, the Galaxy Nexus is another 3mm skinnier still.) The most notable physical difference between the Commando and AT&T's durable new addition is the height. Despite having a slightly larger screen (3.7 inches versus 3.6), the Rugby Smart is actually 6.1mm shorter.

It's quite pedestrian in appearance and there's very little that hints at its abuse-absorbent design. The body is fashioned primarily out of plastic, with rubberized grips on the side and a sheet of tough, scratch-resistant glass up front covering a 480 x 800 Super AMOLED panel (yes, kiddies, that means this is PenTile). Sadly that display and protective cover conspire to keep sunlight visibility to a minimum. The screen simply doesn't get bright enough and the glass is extremely reflective.

The Rugby bucks the recent trend towards capacitive keys, and instead sports four physical buttons up front. They're lightly textured and depress with a rather satisfying click, though for all sound produced they have surprisingly little travel. The right edge of the phone is home to the power / lock key and over on the left is the volume rocker. A nifty trick: hold down volume-up to use the blindingly bright LED flash as a torch. In what has become a pretty standard layout, the micro-USB port lives on the bottom, with the headphone jack up top. Both are hidden behind plastic doors designed to keep out dust and dirt. You'll also find the pair of cameras in the usual places -- the primary 5-megapixel shooter 'round back and a 1.3-megapixel cam up front in the top left-hand corner.

Despite being largely plastic, the phone feels solid in the hand, if not exactly "premium." The rubberized grips lend some gravitas to its design and, at 4.4 ounces, it weighs slightly less than the glass-and-metal iPhone 4S. The rounded backplate and its raised diamond pattern don't feel quite as tactile as soft touch plastic, but the phone should rest comfortably in your hand nonetheless. The most distinguishing physical feature is the lock on the rear, which holds the battery cover in place. It doesn't seal the door any tighter to keep out water, but it does prevent it from flying off when dropped -- say, 10 feet onto a rock-strewn driveway (guilty).

Underneath that impeccably sealed hood is a rather paltry 512MB of RAM and a 1.4GHz, single-core Snapdragon S2. For casual use these components are passable, if noticeably slower than what you'll find in competing devices. While the performance isn't unbearable, per se, there does seem to be a bit of lag to almost every action -- enough to infuriate the more impatient among us. In benchmarks the phone consistently brings up the rear. Sure, its relatively high clock speed helps it keep pace in the single-thread Linpack (it even edges out the decidedly higher-end Droid RAZR), but its 4,319.45ms finish in SunSpider is one of the worse runs we've seen in recent memory, as was its 41.5fps average in the graphics test NenaMark.


When compared to the rest of the rugged smartphone field, however, those numbers are pretty darn good. The Commando, its primary competitor at this point in time, settles for a measly 800MHz single-core CPU. Perhaps an even bigger plus here is the inclusion of 4G (or faux-G, as it were). While the other military-grade Android phones we've seen have been stuck with aging EVDO radios, the Rugby Smart packs an HSPA+ antenna that pulled down an average of 7.1Mbps -- about five times what you can realistically expect from the Commando or Motorola Admiral, a rugged phone sold through Sprint. The Rugby Smart's upload speeds were equally impressive, hovering around 6.2Mbps near our New York City hideout.

The 1,650mAh battery was more than enough to get through a day of normal usage, and perhaps a bit more. Under the pressure of our constant manhandling early in the review process we had to pause and charge midday, but that would probably make us the exception rather than the rule. On our standard battery drain test it stunned by blowing past the 11-hour mark which, if we hadn't witnessed it ourselves and double checked the settings, we would never believe. It finally petered out after 11 hours and 38 minutes of looping a movie.

We're sure the laggy performance of the sub-par hardware isn't helped any by the TouchWiz'd Gingerbread that limps along on the tiny screen. And, let's not kid ourselves, 3.7 inches is small by today's standards, and you'll realize it as you try to peck out messages with the cramped on-screen keyboard. Now, the fourth iteration of Sammy's Android skin is definitely a vast improvement over its predecessors and one of the less offensive customizations on the market, but that doesn't mean you've got to like it. Manufacturer-designed interfaces continue to be a contentious issue, especially around the Engadget compound. That being said, we'd rather deal with TouchWiz than Blur on the Admiral or whatever it is that Casio did to Android with the Commando.

Less contentious is bloatware -- and there's plenty of it here. Present and accounted for: AT&T Code Scanner, FamilyMap, Navigator, Live TV, myAT&T, Qik, QuickOffice, YellowPages, AllShare and, of course, Sammy's various "hubs." Some of the included software is uninstallable and, though there's thankfully no Let's Golf in sight, we'd still prefer to be able to remove any app we want.

The lone bright spot, as far as we're concerned, is Kies air which turns your cellphone into tiny server that you can connect to wirelessly and manage your mobile from the comfort of your desktop browser. It didn't always work as smoothly as we would have hoped, occasionally refusing to download files from the phone, but it's still a good deal slicker than plugging into a PC and opening your file manager. You can even connect a pair of Samsung handsets and share content between them with the app.

The 5-megapixel camera certainly isn't a revelation, but it's a capable enough performer. In fact, images and video aren't materially different from those we captured with the Galaxy Nexus. Now, we weren't exactly blown away by that device's shooter either, but that's because it's a flagship handset and our expectations were loftier. The Rugby, on the other hand, is a middle-of-the-road device. Pics taken under particularly bright sunlight look a tad hazy and darker images show significant noise, but at least the color reproduction and white balance are decent. Given ideal lighting, it even manages to capture some rather impressive macro shots.

Video quality, on the other hand, is a bit disappointing. That single-core processor means you're topping out at just 720p, and noise reduction is basically nonexistent. Again, the color here is clear and balanced, but there is a noticeable amount of artifacting and wobble visible in frames -- even when you're panning slowly. We've seen plenty of phones where the video can stand next to your average pocket camcorder and hold its own, but this just isn't one of them. It's fine for the occasional quick clip, but the movies produced are definitely more YouTube- than Vimeo-quality, if you catch our drift.

The Rugby's durabilty is something of a mixed bag. The fortified glass was as scratch resistant as they come, but were concerned about its ability to absorb a strong impact without shattering. We haven't hit it with a hammer to find out just how easily it will break into a million pieces... yet. Still, we dropped the phone -- repeatedly -- on hardwood floors and rock-covered drive ways and the phone came away with little more than a few scuffs. Even when we took it up to 10 feet. We have no sandstorms in New York City, so testing its dust-proofing was a bit hard, but we were able to submerge it in water. Now, we didn't put it three feet under for half an hour, but it's probably better that way. While it survived a glass of water for 20 minutes and a running sink for about five, there were some issues after the dunkings -- something the Commando shook off with ease. In the immediate aftermath of a thorough soaking the menu button stopped responding and the touchscreen became much more finicky. It (mostly) recovered after we left it out to dry, but the menu key still occasionally gives us fits. Granted, such abuse would have killed a lesser device -- we've seen even a brief dampening destroy an iPhone -- but we did expect a bit more from Sammy's tough handset.

Well, this is a pretty easy decision to make, really. Are you on AT&T? Do you cherish the ability to give your phone a beating over laying claim to top-shelf specs? Then pretty much your only option is the Rugby Smart. Even if you're free to pick whichever carrier you please, this is still probably the way to go if you're in the market for a ruggedized smartphone. Though the Commando does seem to stand up to abuse a bit better, its significantly chunkier design, even paltrier specs and egregiously customized take on Android make the Rugby Smart the clear champion. And, unless you absolutely need a QWERTY keyboard, we can't find a compelling reason to recommend the Admiral over this. That's not to say there aren't drawbacks, obviously. The performance is hardly brisk, and the modest screen might pose a challenge to the large callous hands for which this was clearly intended. Still, if you're looking for a smartphone you'll feel comfortable taking out in a hurricane, this is it.
In this article: android, android 2.3, Android2.3, att, faux-G, gingerbread, hspa plus, HspaPlus, mobilepostcross, review, rugby, rugby smart, RugbySmart, rugged, rugged phone, RuggedPhone, Samsung, samsung rugby smart, SamsungRugbySmart, touchwiz, touchwiz 4.0, Touchwiz4.0, video
All products recommended by Engadget are selected by our editorial team, independent of our parent company. Some of our stories include affiliate links. If you buy something through one of these links, we may earn an affiliate commission.
Share
Tweet
Share