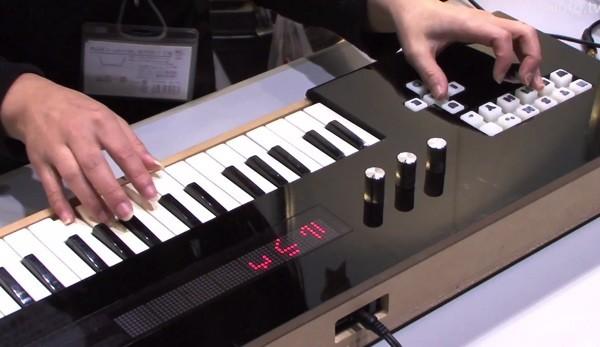 Tired of singers over pro-ho-ho-ho-nouncing every vowel? Perhaps the solution is to just remove their ilk from the equation altogether. That's the idea behind Yamaha's new Vocaloid Keyboard, which transforms the Vocaloid software into a ready-to-play device. 16 keys represent consonants, vowels and the types of voicing marks used in Japanese, while at the same time selecting a tone on the keyboard. An LED display prints out each letter as its plays, ensuring that you aren't making any playing errors (or should that be "typing errors?"). Experienced musicians who have used the device found that they were able to produce nursery rhymes after three hours of practice, but sadly the company isn't planning to press it into production. Instead, as the chip inside is "removable," it might contemplate licensing it to another interested party, Simon Cowell, perhaps.

In this article: Audio, DAW, Diginfo, Digital Audio, DigitalAudio, Interface, Japan, Japanese, Keyboard, Piano, Singing Keyboard, SingingKeyboard, Synthesizer, video, Vocaloid, Yamaha
All products recommended by Engadget are selected by our editorial team, independent of our parent company. Some of our stories include affiliate links. If you buy something through one of these links, we may earn an affiliate commission.
Share
Tweet
Share