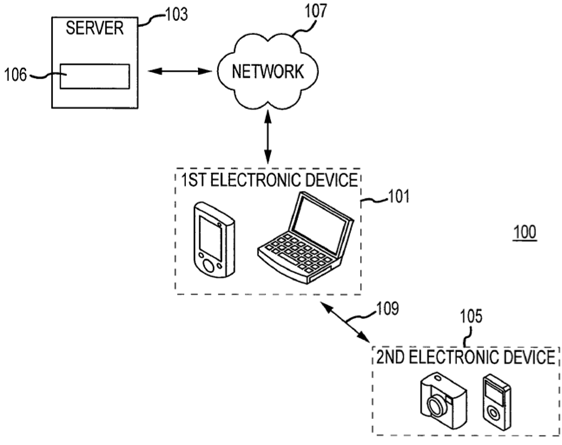 "Siri, turn on the flash and take three pictures with my camera after waiting two seconds." Apple's intelligent voice control system has been wildly popular amongst consumers in the U.S., and abroad, but Siri could be making her way to other devices in the future, including iPods, cameras and other consumer electronics. "Okay, Rock God, I will take your picture in two, one..." A patent by Apple filed in 2010 but published today describes a scenario in which you could control a secondary electronic device using your voice, with all of the backend processing passing through a connected smartphone or computer. According to the patent:

In other words, you could have Siri-like control of virtually any device, with all of the required hardware and software residing on an iPhone or MacBook, linked with other devices over WiFi or Bluetooth. Voice control wouldn't be practical in all situations, but it could be enormously helpful for certain operations, like adjusting settings or reviewing images. Instead of scrolling through hundreds of images, you could simply say "Siri, show me pictures from last Thursday," and see exactly the shots you were searching for. As always, this is one of thousands of Apple patents, and it quite possibly may never come to fruition as described. But here's to hoping it will. "Siri, show our readers the patent application" -- you'll find it at the source link below.

Update: Well, it looks like we missed the mark a little bit here, as this is a patent application, not a granted patent. It's for a voice control system where a device receives voice commands and turns them into text using a speech-recognition algorithm received from a remote server -- which sounds an awful lot like Siri.
In this article: apple, apple patent, ApplePatent, mobilepostcross, patent, patent application, patent office, PatentApplication, PatentOffice, siri, software, us patent, us patent and trademark office, UsPatent, UsPatentAndTrademarkOffice, USPTO, voice command, voice commands, voice control, voice controls, VoiceCommand, VoiceCommands, VoiceControl, VoiceControls
All products recommended by Engadget are selected by our editorial team, independent of our parent company. Some of our stories include affiliate links. If you buy something through one of these links, we may earn an affiliate commission.
Share
Tweet
Share