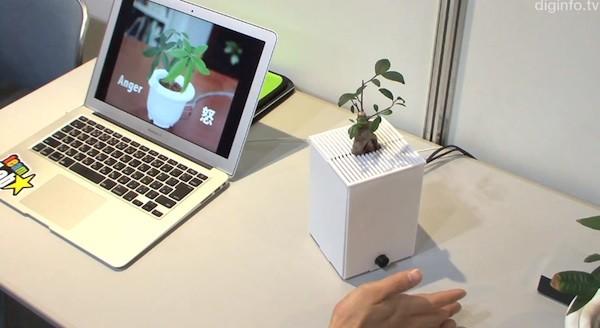 Looking for a little more companionship from your household plants? Then a team of researchers from Keio University in Japan may have just the thing for you. They've developed a rather elaborate system that promises to lets plants react to you and display a variety of different emotions (see "anger," pictured above). Yes, that's a real plant sprouting up out of the box, which contains sensors and microphones that monitor its surroundings, as well as some actuators that are connected to the plant itself with some fine cords. Lest you worry about the safety of the plants themselves, the researchers say that they've had plants rigged up like this for nearly a year and none have wilted. Of course, there's no indication of a commercial version just yet, but you can get a glimpse of the current state of things in the video after the break courtesy of DigInfo TV.