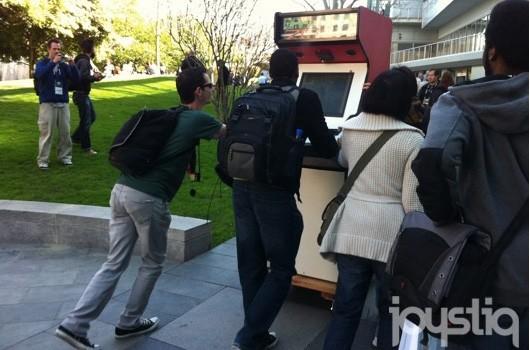 In a spot usually reserved for household names like Street Fighter or Galaga, the cabinet's title reads OAK-U-TRON 201X, hastily printed on computer paper. Heavy with the hardware and battery required to make it operate on the move, the OAK-U-TRON's creators Alex Kerfoot and Mars Jokela were sweating with the effort of pushing it through a park in the middle of San Francisco. Like a DIY Trojan horse, it contains a collection of indie titles specifically written for the Winnitron software system, all housed in a piecemeal arcade cabinet complete with an old computer monitor and PS2 fight stick controllers.

I had spotted them while eating lunch in a park in the heart of downtown San Francisco, and made the decision to throw away my mediocre turkey sandwich in order to jog over and check it out. As we walked along, folks from everywhere in the park had the same idea I did, and examined the moving cabinet. Of course, that's exactly what Kerfoot and Jokela were hoping for.

Built in just two weeks, the machine was designed to be taken on Occupy Oakland's Move-In Day march, an event hoping to retake an abandoned building somewhere in downtown Oakland for use as a community center. As the pair had been supporters of Occupy for a time, but had never gotten involved past participating in a few marches, they wanted to find a way to creatively contribute to the socioeconomic, equality-promoting movement. Keeping with the spirit of the traditionally DIY-minded group, they built the machine by hand with primarily recycled materials and hardware.

"I heard [about the march] and thought 'that's brilliant!' It's a community center, so it should have a game room," said Kerfoot. "Games bring people together." Even our little walk through a park in San Francisco triggered people running up and checking it out, laughing and chatting. "With Occupy Oakland, and Occupy in general, there's a lot of energy for creative protest." Their particular creative vision was apparently a huge success. Strangers were interacting with one another, laughing and chatting as they played games.

Plus, they were cooperating. As some played, others helped push. Strangers helped navigate the clumsy device up windy ramps, around a statue, across bridges. All this while playing Keep Me Occupied, a brilliant new title from Dys4ia creator Anna Anthropy. Made specifically for the OAK-U-TRON and its maiden Move-In Day voyage, Keep Me Occupied is a 50 play cooperative game in which duos of players take turns flying through a maze, holding switches open for their compatriots. After their 60 second turn was up, the players would land on the last switch they had touched, keeping that door open for all players afterward.

"I knew that I wanted [Keep Me Occupied] to be about cooperation, and I wanted every player to have some impact on the game, regardless of their skill," said Anthropy during her talk at the Experimental Games Session at GDC 2012. "The game was going to be played by lots of people, not all of them gamers."

As a metaphor for the Occupy movement, it couldn't be more apt. Everyone is able to help the cause, even those who aren't necessarily the most skilled at playing the game. There are plenty of doors early on for less than skilled players to land on, making it much easier for those who have a better chance of reaching the top to succeed. "The mechanics really are the message ... They see the people who have played before holding open the gates and they get it. They're all working together," says Jokela. "You also have to cooperate with the other person playing with you. Otherwise, there's no way to advance. It's ingrained deep within the game."

Later in the talk, Kerfoot and Jokela hopped on the machine to play a quick round of Keep Me Occupied. But, due to the machine's single output slot, the game had to be projected on the big screen, making it difficult for players to see what was going on. The result? A bunch of people working together to point out the direction that each player should go by waving their arms. It wasn't a perfect method, and Kerfoot and Jokela didn't get far, but it showed how well a group of people could work together when given an apparent goal.

Keep Me Occupied's simplified message, when combined with the public-minded ideals behind the creation of the OAK-U-TRON 201X, is what makes the project great. Created by just a few people in a short period of time (Anthropy herself said anyone could have made Keep Me Occupied), it exemplifies a growing DIY sentiment within the gaming community. What's more, these DIY elements are, by design, making their way into the public eye. These aren't games that will be tossed into the pool of the Internet to be forgotten -- they're being shoved into the faces of everyone that walks by.

"You used to have to go to an arcade or a bar or something to play these games with people," said Kerfoot. "I like bringing back the idea that people have to meet in real life and interact to play them." So, rather than wait for it to happen, they literally took it to the streets.

Keep Me Occupied became a social game in the true sense of the word, created by and for a specific audience, but with the potential to turn converts to the cause. In the days leading up to the march, Jokela showed the game to a fellow Occupier, who was skeptical as to whether the OAK-U-TRON would keep the marchers engaged to the cause, or simply be a distraction. "When he got to play the game he thought it was awesome. He loved it. He really saw the value in it," Jokela said.

"[Keep Me Occupied] approaches games as social experiences. As events that strangers can unite over. As encounters that can privilege connection over competition," Anthropy said in her talk. "It's a way of thinking about games that I'd love not to have to call experimental." With a DIY approach to game development and design, Keep Me Occupied and the OAK-U-TRON are doing more than their part to further that cause.

Even better, it's downright fun. It's a celebration of "having this completely absurd idea of a mobile arcade cabinet," as Kerfoot put it. Just like the Occupy movement, it's a grassroots, creative approach to an issue those involved are passionate about. And, you know what? It's awfully convincing.

"I like to think that I'm in this because I'm in the business of saying 'yes' to crazy ideas," said Jokela.

Taylor Cocke is a freelance writer currently living the Bay Area, who has written for 1UP, Official Xbox Magazine, Playstation: The Official Magazine, VG247, and more. Follow him on Twitter @taylorcocke.
In this article: anna-anthropy, Keep-Me-Occupied, Oak-u-Tron, Occupy-Oakland, Political
All products recommended by Engadget are selected by our editorial team, independent of our parent company. Some of our stories include affiliate links. If you buy something through one of these links, we may earn an affiliate commission.