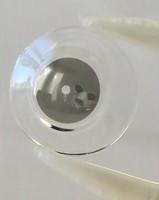 DARPA saw the battlefield potential in AR glasses ages ago, when even Sergey Brin was happy to wear regular Ray-Bans. It's now stepped up its investment, giving more cash to one of its research contractors -- a company called Innovega -- to produce prototype contact lenses that could make military wearable HUDs smaller and less conspicuous. Innovega's iOptik lenses don't actually include a display, but rather allow the human eye to focus on an image from a separate accessory that sits right up close to the eyeball. The lenses have different zones that give the wearer multiple areas of focus, so they can see the overlaid augmented reality HUD -- such as a feed from an overhead drone -- but also warlike events going on in the immediate environment. Judging from the video after the break, however, calling them plain 'bifocals' might be taboo.

In this article: AR, augmented reality, AugmentedReality, bifocal, combat, contact lens, contact lenses, ContactLens, ContactLenses, darpa, focus, glasses, goggles, heads up display, HeadsUpDisplay, HUD, innovega, ioptik, lens, military, multi-focus, video, war
All products recommended by Engadget are selected by our editorial team, independent of our parent company. Some of our stories include affiliate links. If you buy something through one of these links, we may earn an affiliate commission.