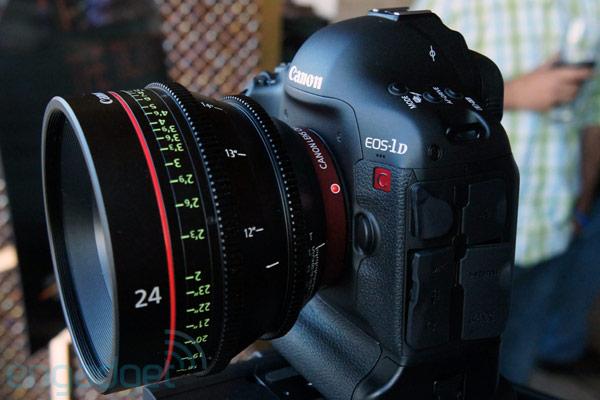 It's been but half a year since Canon first entered the motion picture market, and the company is already back with its second and third professional video rigs. The Cinema EOS-1D C marks the most drastic departure from the C300, which launched last November at an elaborate Hollywood event at Paramount Studios. It was at this spectacle that we were first introduced to the 1D C, which was then but a glass-protected prototype. Now, far sooner than expected, the (relatively) compact camera is making its return to the spotlight, in more polished form. Like the 1D series bodies that bear similar monikers and appearances, including the yet-to-ship EOS- 1D X, the C model is a very capable still shooter, offering the same core functionality of the $6,800 X. It also brings 4K capture to the table, however, prompting Canon to price the camera far above its less-abled counterpart. At $15,000, we don't expect to see red C logos popping up in many a photojournalist's gear bag, but for deep-pocketed professionals with a need to capture 4K clips, this may be a worthwhile acquisition.

We took a closer look at the 1D C at Canon's pre-NAB event in Las Vegas. As the pictures and spec sheet imply, it's the 1D X's clone in nearly every way. In fact, beyond the headphone jack and C logo, there's not much distinguishing the pair externally. You'll need to hop into the menu before you'll really notice a difference, in the form of several unique 4K shooting modes, including 8-bit 4:2:2 24fps captures to a CF card or 8-bit 4:2:2 clips in an uncompressed format over HDMI. Otherwise, the C looks and feels just like the X -- a model pro snapper that we've already managed to fondle on three continents under Canon's watchful eye, but still has yet to ship. Both cameras are gorgeous externally, with slight design tweaks yet no drastic overhaul, dating back to the very first EOS-1D. If you haven't had a chance to gawk at either model, you'll at very least be able to check out the 1D C at Canon's booth this week at NAB . We're hoping to see both cameras hit the market sometime in 2012, and who knows -- this Cinema EOS could even be the first next-gen 1D to ship. Take a closer look in the gallery below, and in our hands-on video after the break.