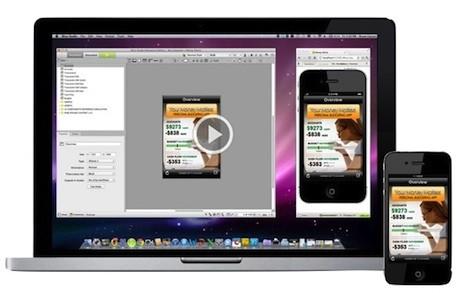 iRise is a visual prototyping platform that is used by enterprise organizations to quickly create UI simulations for apps. The company today announced that the newly-released iRise 8.10 can now create those visual simulations for iPad and Android apps.

iRise is useful when organizations are pushed to get new iOS apps out the door as quickly as possible. By creating realistic simulations, iRise speeds development time by shortening the requirements specification process and allowing developers to elicit feedback from stakeholders before coding begins. That, in turn, cuts the amount of rework required at later stages of development.

Once a group of stakeholders has had a chance to use a prototype of an app and agrees on the look and functionality, iRise generates HTML for the final code user interface. The iRise simulations are described as "visual blueprints" for complex business applications.

Other new features include the ability to use system fonts, model push transitions, and the ability to review simulations directly on mobile devices. Previously, simulations needed to go through the iRise Definition Center server access.

iRise has a series of tutorial videos available on YouTube that show how the platform works to speed iOS software development. Trial versions of iRise are available for download.

In this article: iOS, iRise, prototyping, requirements, simulation, update, user interface design, UserInterfaceDesign
All products recommended by Engadget are selected by our editorial team, independent of our parent company. Some of our stories include affiliate links. If you buy something through one of these links, we may earn an affiliate commission.