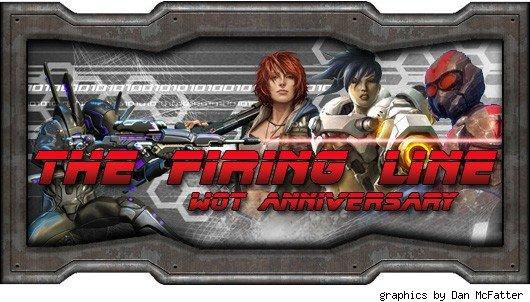 We've been hearing about World of Tanks for so long that it seems crazy to think the title is just now celebrating its first anniversary. Sure enough, though, Wargaming.net's lobby-based multiplayer title is barely a year old. Well, OK. It's almost two years old if you count its summer 2010 beta release, which we won't since the title up there says first anniversary.

Anyhow, what's even scarier than the passage of time is the fact that World of Tanks (and the company behind it) is showing no signs of slowing down.

It's hard to talk about World of Tanks without talking about its numbers. As we reported last week, the title boasts ridiculous stats like 350 million battles played over the past year and 75 billion shells fired over the same period.

And that's not even getting into the crazy (and world-record-breaking) concurrent user numbers, registered account numbers, or the explosive growth of the game's parent company, which is now producing two additional World War II-focused action titles designed to capitalize on World of Tanks' success.

The game initially launched in North America on April 12th, 2011. The first post-launch patch came our way a month after that. Version 0.6.3.4 added several new tanks to the game's roster as well as the Mountain Pass and Prairie maps. Wargaming.net designers took a wrecking ball to the Pagorki map and even went so far as to rename it (it's now called Mines). Komarin also received some gameplay tweaks, most notably the removal of bush cover and the addition of building cover to the map's central island.

May also saw the release of the clan wars game mode, which we previewed in a chat with Wargaming.net CEO Victor Kislyi. Clan wars would go on to become World of Tanks' version of endgame; the devs are also working on a cross-game version of it that will eventually span World of Tanks, World of Warplanes, and World of Battleships.

The June patch (v.0.6.5) added a few American tanks to the mix. It also brought us the Redshire and Arctic maps and a number of smaller bug fixes.

World of Tanks officially entered the e-sports realm in August of 2011. Wargaming.net partnered up with the Electronic Sports League to bring WoT into its Major Series, which at the time boasted over 3 million registered users and 740,000 registered teams. The game's 6.6 update introduced even more tanks, including several German models and a new map called the Siegfried Line. Crucially, the patch also removed the paywall for two-player platoons.

August 2011 was a banner month for other reasons too. It marked the one-year point since the title's beta, and it also saw World of Tanks enter the Guinness Book of World Records for the most simultaneous player connections to a multiplayer gaming server -- a whopping 91,311. Wargaming.net also announced that its maiden title had surpassed 5,000,000 registered players worldwide.

The good times kept on rolling into September, and World of Tanks rolled into retail outlets as well. Wargaming.net initially restricted its title to digital distribution outlets, but the firm threw a bone to old-school box fans by building out a nifty physical package that included an exclusive in-game tank and a bit of currency to spend on it.

Update 7.0 showed its face in December 2011. With it came World of Tanks' version of stealth mechanics (basically cosmetic camouflage) as well as new multi-cluster-technology for the game's servers. Two new maps debuted, as did a revamped collision system for German tanks. December also saw the game obliterate its own world record, as 250,000 players jammed their way onto a single shard and blew away the previous mark of 91,311.

French tanks showed up in the game's 7.1 patch after the new year, which pretty much brings us up to the present day. Wargaming.net just recently delivered the 7.2 update, which added a new American map (Live Oaks) as well as American destroyers and updates to the top-tier American heavies. The company also announced 7.3 along with a slew of tweaks to the game's Soviet tech tree and the title's first Asian map.

As you can see, Wargaming.net hasn't been resting on its laurels since World of Tanks' launch. What about the gameplay, though? Numbers are great, and content updates are even better, but all of that is for naught if the game fails when it comes to the fun factor. I was initially skeptical, both because of the game's lobby-based design and due to the fact that tanks don't really light my fire like sci-fi and fantasy MMOs typically do.

Happily, my tanking time was quite a bit of fun, and it's one of those games I keep on my desktop for occasions when orcs, elves, and internet spaceships just don't cut it.

The Firing Line's Jef Reahard has a twitchy trigger finger, a love of online shooters, and an uncanny resemblance to Malcolm Reynolds. OK, maybe not, but at least if he ever kills you, you'll be awake, you'll be facing him, and you'll be armed.
In this article: f2p, featured, firing-line, first-anniversary, fps, free-to-play, historical, mmofps, opinion, pvp, tank, tanks, tfl, the-firing-line, third-person-shooter, tps, war, wargaming.net, world-of-tanks, world-of-tanks-anniversary, world-of-tanks-first-birthday, world-of-tanks-retrospective, wot, wot-anniversary
All products recommended by Engadget are selected by our editorial team, independent of our parent company. Some of our stories include affiliate links. If you buy something through one of these links, we may earn an affiliate commission.