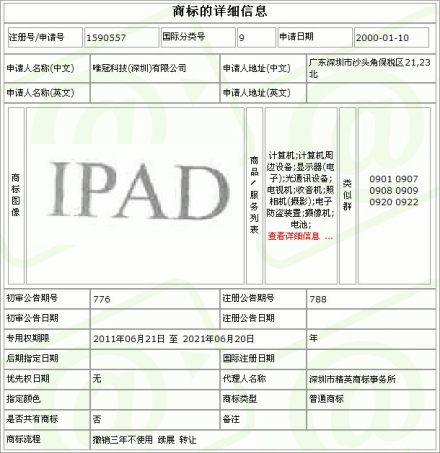 Who knew some funky capitalization could cause so much trouble? Proview -- the purveyor of that 90s-era all-in-one called the iPAD -- hasn't let up in its fight to wrestle the rights to the iPad name from iPad maker Apple. The legal antics started in China, where Proview temporarily managed to get Apple's tablet booted off store shelves before being rebuffed by a Shanghai court -- after which the company promptly brought the case stateside. It's been all quiet on the iPad trademark front for a solid month now, but a report from All Things D indicates that the squabble is still going strong. Today the Chinese vice minister for the State Administration for Industry and Commerce (SAIC) declared that Proview is, in fact, the rightful owner of the iPad trademark. The SAIC has so far kept mum about the iPad trademark spat, so its decision to break that silence is sure to carry some weight when it comes time for the Chinese higher court to hand down its verdict.

In this article: Apple, apple ipad, AppleIpad, court, ipad, lawsuit, lawsuits, legal, legal news, LegalNews, minipost, proview, proview ipad, Proview Technology ipad, ProviewIpad, ProviewTechnology, ProviewTechnologyIpad, Trademark, trademarks
All products recommended by Engadget are selected by our editorial team, independent of our parent company. Some of our stories include affiliate links. If you buy something through one of these links, we may earn an affiliate commission.
Share
Tweet
Share