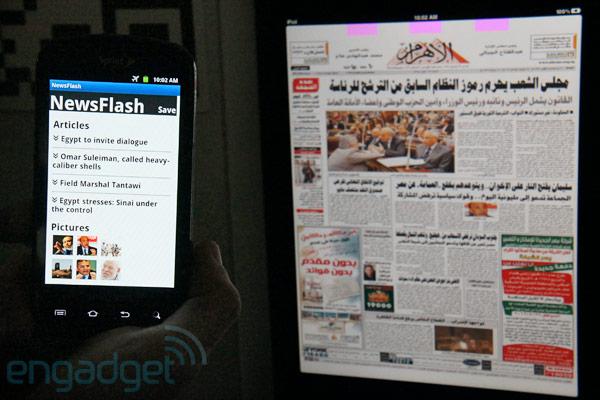 MIT's Media Lab is chock-full of cutting-edge tech projects that researchers create, then often license to manufacturers and developers. One such project is called Newsflash, and uses high-frequency red and green light to transmit data to the built-in camera on a receiving device -- in this case Samsung's Epic 4G. The concept is certainly familiar, and functions in much the same way as a QR code, generating flashing light that's invisible to the human eye instead of a cumbersome 2D square. In the Media Lab's implementation, an iPad is used to display a static news page with flashing colored bands at the top, representing just a few vertical pixels on the LCD.

As the device presents the standard touch experience you're already familiar with, it also broadcasts data that can be read by any camera, but flashes too quickly to be distracting or even noticeable to the naked eye. A NewsFlash app then interprets those flashes and displays a webpage as instructed -- either a mobile version with the same content, or a translation of foreign websites. As with most MediaLab projects, Newsflash is simply a concept at this point, but it could one day make its way to your devices. Jump past the break to see it in action.

Update: At the Newsflash team's request, we've replaced our hands-on video with the updated version you'll find below.