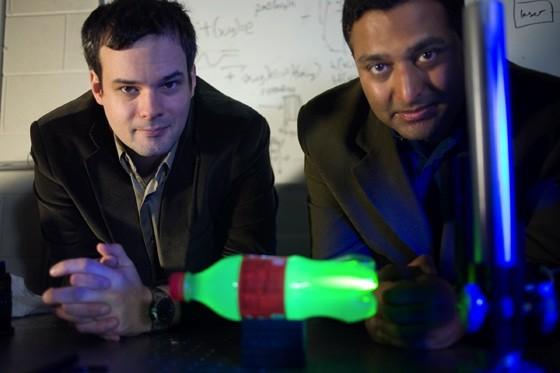 A team from the MIT media lab has created a camera with a "shutter speed" of one trillion exposures per second -- enabling it to record light itself traveling from one point to another. Using a heavily modified Streak Tube (which is normally used to intensify photons into electron streams), the team could snap a single image of a laser as it passed through a soda bottle. In order to create the slow-motion film in the video we've got after the break, the team had to replicate the experiment hundreds of times. The stop-motion footage shows how light bounces through the bottle, collecting inside the opaque cap before dispersing. The revolutionary snapper may have a fast shutter but the long time it takes to process the images have earned it the nickname of the "the world's slowest fastest camera."

In this article: Andreas Velten, AndreasVelten, Laser, Lasers, Massachusetts, massachusetts institute of technology, MassachusettsInstituteOfTechnology, MIT, MIT Media Lab, MitMediaLab, Ramesh Raskar, RameshRaskar, video
All products recommended by Engadget are selected by our editorial team, independent of our parent company. Some of our stories include affiliate links. If you buy something through one of these links, we may earn an affiliate commission.
Share
Tweet
Share