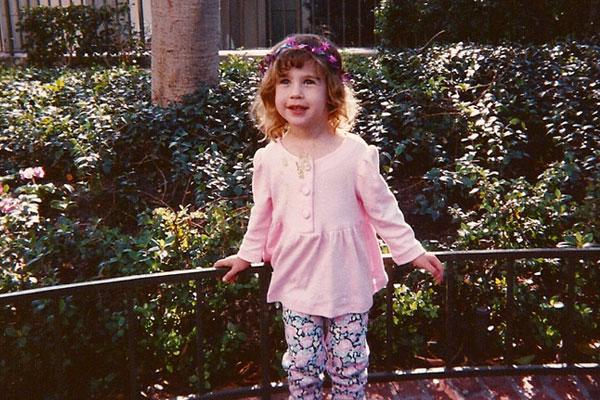 Welcome to Growing Up Geek, an ongoing feature where we take a look back at our youth and tell stories of growing up to be the nerds that we are. Today, we have our new reviews editor, Sarah Silbert.

I'm not your textbook-case geek. On that authoritative dork-geek-nerd venn diagram, I sit undeniably closer to the nerd quadrant. I mean, a childhood defined by penning mini-zines, banging on the piano and filming countless movies in my garage hardly earned me a reputation as a precocious little techie. Sure, I liked computers and math -- and I, er, may have graphed the distribution of my Halloween candy once or twice, just for fun -- but my entryway into gadgets and geekdom was an overactive imagination.

When I was little, the one thing I wanted to be when I grew up -- besides an ice skater, a marine biologist and the next Carmen Sandiego -- was Peter Pan. I liked the Disney movie and all, but what intrigued me the most was the flying bit. Airplane was my first word, and I was one of those rare toddlers who absolutely loved air travel. According to family lore, I thought I could actually fly, though thankfully no one let me put that theory to the test. I eventually accepted that I was land-bound, but that didn't mean I had to give up my dream world.

Long before after-school cross country provided the perfect excuse for my first cellphone, an LG Chocolate slider, a camcorder was my most prized possession. My brother and I wrote and recorded movies and skits for any and every occasion, but my crowning achievement was a video I shot for a fourth-grade assignment. I had to invent and advertise a new product, and I thought up shoes that could make anyone a good dancer. My prototype models may have only been spray-painted Keds with styrofoam platforms, but the commercial featured my grandma rocking the shoes on her walker, a surefire way to earn an A. In college, I even produced some work to be proud of, including a painstaking two-minute claymation piece shot with a Nikon D40 and a series of 35mm prints starring my old Tare Panda plushie.

Computer and video games have always figured heavily in my life, from the elementary school computer lab where I fell in love with Math Blaster to the hours I spent solving puzzles in Myst and Riven. Behind nearly all these early gaming adventures was the influence of my dad, who passed down a love for Star Wars, along with a flurry of out-there PC titles. (The Last Express and The Seventh Guest, anyone?) And then there were my older cousins, who had more success bringing me into the Atari fold than they did teaching me poker.

I had to leave behind those CD-ROMS and my parents' Power Mac desktop at some point, and the early 2000s kicked off my obsession with PMPs. Even the arrival of the iPhone couldn't tear me from my 2005-era 80GB iPod classic. That device still travels everywhere with me, even if it may seem redundant next to my smartphone. (I have a lot of music, okay?) I'd rather not dwell on my other early tech decisions; I really wanted to like the Sony VAIO VGN, and I had a short fling with a Compaq Presario 5420US tower because in my young mind it evoked the iMac Blueberry. Ah, youth.

It's safe to say that I have an emotional attachment to tech, and my childhood bedroom is a testament to many years of trial and error, with notebooks, DSLRs and point-and-shoots that saw me through school years and travels in Europe. I don't like to get rid of things, but being a tech journalist has forced me to keep that sentimentality in check. Still, even though I've perfected the art of packing light, I'll toss in my 35mm Nikon F along with the Canon Rebel T2i if room permits.

Sarah Silbert is on Twitter under @ssilbert, where she supplements her tech posts with Twin Peaks references and gripes about slow walkers.

In this article: growing up geek, GrowingUpGeek, sarah silbert, SarahSilbert
All products recommended by Engadget are selected by our editorial team, independent of our parent company. Some of our stories include affiliate links. If you buy something through one of these links, we may earn an affiliate commission.
Share
Tweet
Share