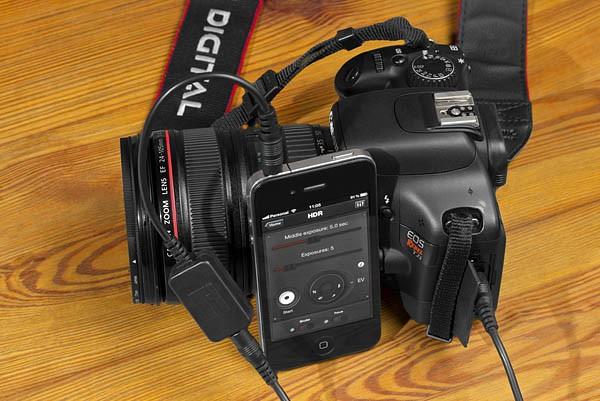 When we first heard about the Kickstarter-funded Triggertrap, it was a nice but nichey lab instrument of a device that could fire your DSLR with diverse stimuli, like lights or ringing phones. It wasn't the first photo-tripping idea we'd seen, but at least it could be had for a fair sum ($75.00) and be used out of the box. But now, by connecting that tech to an app and charging $19.98 for both the software and hardware, Triggertrap might open up remote snapping to a lot more folks.

Running off any iPhone, iPad or iPod using iOS 5, the app uses a dongle which can be connected by cable or infrared to most DSLRs or advanced compacts. From there, you'll be able to use all of your iDevice's sensors as triggers, from motion through to facial recognition and even GPS. The app doesn't just fire the shutter, either -- it also gives you control over the focus and flash. And if you don't have a separate camera, the iPhone's built-in cam can be used instead -- which would save you from buying the $9.99 dongle, if you have the necessary accoutrements. So if you've been wondering how to get those hard-to-shoot images, or have more nefarious ideas, check the videos after the break.

In this article: camera, camera trigger, cameras, CameraTrigger, digital camera, DigitalCamera, dlsr, GPS, intervalometer, kickstarter, motionsensor, remote, remote control, RemoteControl, time lapse, TimeLapse, trigger trap, TriggerTrap, wireless
All products recommended by Engadget are selected by our editorial team, independent of our parent company. Some of our stories include affiliate links. If you buy something through one of these links, we may earn an affiliate commission.
Share
Tweet
Share