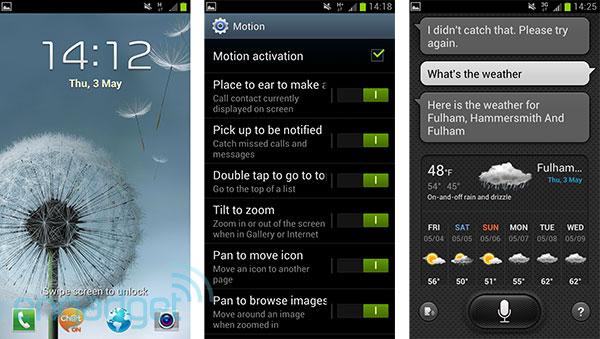 So, you nodded agreeably when all those hardware specs were listed, but are a bit more intrigued by what Samsung's done to the Android 4.0 interface. In short, TouchWiz is still here, but there are some noticeable differences between it and the legacy version seen on the Galaxy S II that bring the GSIII closer to a stock Android experience. But, there are also some things that are a rehash of what we saw on last year's Gingerbread-powered hardware. We've delved into this latest interpretation, and tried out Sammy's S Voice and S Beam features along the way. Our deeper impressions are after the break, where you'll also find a quick video rundown and can see the new software in action.

There are several welcome additions that are obvious as soon as you turn the screen on -- a quartet of lock-screen shortcuts. Customizable, and available with a swipe, those shortcuts aren't the only way to access things in a pinch, however, as Samsung's new "human" gestures are on board as well. For example, one of these gestures lets you jump straight to your camera from the lock screen by pressing and holding a fingertip to the display and rotating the handset into landscape mode. The physical button layout below the screen -- much like the global Galaxy S II -- dictates a similar navigation ethos, with multitasking accessible by a long press on the home button. The base style remains unmistakably TouchWiz, but there are some extra twists. Unlike stock ICS, there's now a settings option immediately available in the drop-down menu, and there are new gesture menu and sharing options, but the remaining look and layout is largely unchanged -- save for little details, like on-off switches, that have been tweaked for Samsung's own design reasons. Samsung's added in Google's own ICS widgets alongside its own versions if you're picky about exactly which calendar app displays on your home screen.

The camera app has been beefed up with more instant-access settings and is where Samsung's push for increased social connectivity comes through strongest. We've outlined these new features in detail, and suffice to say, they look to be traits many folks will be using often in their day-to-day.

It's hard to describe S Voice as anything but Samsung's interpretation of Siri. The preview software wasn't able to unlock itself via our verbal command, although Samsung tells us this is one of its abilities. We had more luck launching apps and asking the voice assistant to perform other tasks like grabbing weather info. As with Apple's version, you need a data connection to get it working, and the voice detection worked reasonably well during our time with the device. Alongside the ability to play video clips in a window on top of any app, S Beam looks to be the highlight among the GSIII's new software offerings. The ability to shoot files wirelessly through a combination of NFC and WiFi is quite handy, assuming you've got a friend with the same phone and a wireless network within reach. Sending video files between handsets only takes tapping them together, and the ensuing transfer is fast -- we shot a 1080p sample video from one phone to the other in a matter of seconds.

So, while Holo fans might balk, it looks like TouchWiz isn't going anywhere soon, because Samsung's looking to prove that it has something to offer beside top-shelf hardware specifications. The company's aiming towards a more, surprise, surprise, Apple-like strategy by focusing on "human" functionality and phone interaction. While gesture functions, S Voice and the like will help separate the company's flagship from both rivals and its existing smartphone line-up, Samsung's still got its work cut out to convince us that these will become desirable and core features of smartphones in 2012. That said, we're intrigued, and are looking forward to testing how well these software additions fare when we can put them through their real-world paces in our forthcoming review.

In this article: android 4.0, Android4.0, galaxy s iii software, GalaxySIiiSoftware, hands-on, Ice Cream Sandwich, IceCreamSandwich, ICS, mobilepostcross, samsung, samsung galaxy, samsung galaxy s iii, samsung mobile unpacked 2012, SamsungGalaxy, SamsungGalaxySIii, SamsungMobileUnpacked2012, touchwiz, video
All products recommended by Engadget are selected by our editorial team, independent of our parent company. Some of our stories include affiliate links. If you buy something through one of these links, we may earn an affiliate commission.
Share
Tweet
Share