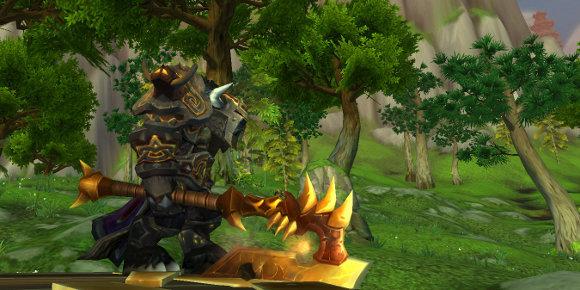 Ghostcrawler has contributed a great deal to an already large list of consolidated warrior issues on the Mists of Pandaria beta forums, and then just kept on posting. It's actually a lot to consider -- so much so that I'm fairly certain I can get two big posts out of it. This post will be the one that tries to break down what it all means.

Some of what he's posting is of more concern to beta testers than the general population (for instance, how the devs prefer their feedback), but we can still take some interesting points from the two posts where GC lays everything out for us. If you'll forgive me for a lot of paraphrasing and selecting:
There's more to discuss, so let's get to discussing it.

Tanking is still very much on the designer's board. Now, to be completely frank, after some painful experiences as a protection warrior on the beta, I haven't gone back to it. I really and viscerally dislike the current sensation of playing as a tank. It feels boring and underpowered at the same time. That feeling of being an armored juggernaut smashing my shield into faces just isn't there, and the active mitigation system (although greatly improved, with both Shield Block and Shield Barrier feeling a lot more worthwhile in recent builds) has failed to grab hold of me. Still, I did like to see that changes are still incoming.

Ghostcrawler - [Warrior] Consolidated List of Issues
One of the reasons we don't always announce changes before they happen is that things can move pretty fast in beta. Even though I mentioned some Protection changes above, they are already out of date. :(

Overall, the goal is to mix up Protection's rotation a little more. Prot warriors are used to lots of buttons, and we don't want too much waiting around. (For Arms and Fury, we can just flood them with rage, but with Protection the risk is that we hit 100% uptime of Shield Block, which turns it from being a short cooldown to a managed buff like Thunder Clap.) We also want to make sure tanks who execute their attacks with more skill are rewarded with better mitigation. To make this compelling, we think it needs to tie into Rage generation.
We think this rotation feels better and more traditionally Prot, but let us know how it feels to you.
source
If you're curious about the changes that are not going to happen, his post detailing them is here. Without having seen these new ideas play out yet, I can say that I really dislike forcing tanking warriors to get all their rage from special attacks. The last thing I want to see is more waiting around to do something because I don't have the rage yet, especially when all of my rage comes from special attacks with 6-second or higher cooldowns or abilities like Revenge that may or may not be up at all -- or spamming Devastate and praying for a Sword and Board proc. That doesn't put my rage control into my hands; it puts it into the hands of the RNG. If I miss a Shield Block because I was waiting for something to proc, I'm going to feel cheated by the RNG, not like I made a mistake. This seems aimed at creating a paranoid playstyle that never wants to do anything in case it needs those resources at a critical time.

The goal Ghostcrawler presents (making tanks who use their abilities better get a mitigation reward) is admirable -- and it's probable that Blizzard's right and it needs to affect rage generation to do that -- but the danger is exactly what the devs said they didn't want for beginning tanks. If you're a new tank and you don't understand how this all works, you end up resourceless and ineffective and won't want to keep tanking. There needs to be more on-demand emergency rage built into this system to keep warriors who decide to pick up the spec at it. This isn't to say that it can't work, and in the hands of some players, it will work exceedingly well. But it presents a fairly large possibility for an extreme learning curve, and that's the last thing warrior tanking needs.

The most recent beta build is already incorporating some of these changes. I'm hopeful that the Shield Slam rage boost and the Unwavering Sentinel change will help alleviate any potential rage starvation. And if I'm right and resources are in too short a supply, that's something the devs can tweak, since it's still in beta. At least the idea of making you want to hit your offensive buttons is still in place.

The maiming, rending, and smashing in of teeth

For both tanking and DPS warriors, the real story is all about the monumental rage and stance redesign. Frankly, these are huge changes to the class, and they're being felt on the beta. They alter the way the class plays and feels to the point that some long-time players may not even recognize their rotations anymore.

That's not necessarily a bad thing, but it's causing issues among players because, at the end of the day, we don't feel the math behind what we're doing. One of the reason damage meters exist is because you can feel like you're doing great but in fact be putting out very little damage, and you can feel weak and underpowered while you're on top of the DPS for your run. Actual performance is important. If a class underperforms, it will lose players to the classes that do the job. But the aesthetics are also key. I've had players comment to me that as long as Titan's Grip exists, they'll keep playing a warrior.

What I find comforting is that the changes being made, even if they concern me at times, are being made with an eye toward how it feels to play. The design of arms and fury are intended to branch away from a similar starting point (big rage generator attack, big rage spender) and feel different to play. Tanking is being modified to create that active feel within the mechanics.

It's this eye toward the actual gameplay experience that will make the difference between specs and give different classes a way to be good and maintain their individual identity while performing the same role. The warrior tank should be the guy smashing a big weapon into a big shield and howling defiance at his enemies, not some dude in a leather kilt doing backflips and making chicken noises. As long as that eye toward the way it feels is intact, I trust the beta process to bring any design deficiencies to light.

I do wish that glyph that let us go to 120 rage had made it in, though. I wanted that.

Expect to see a lot more discussion of this enormous thread and the newest build from me this week. There's a lot more to cover.