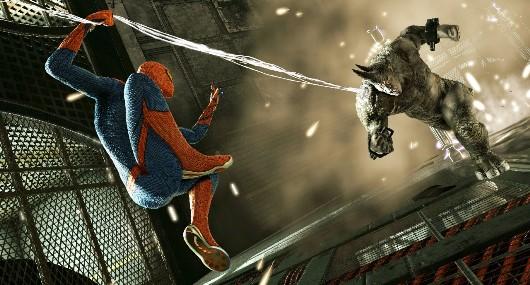 These two pre-order bonuses for The Amazing Spider-Man couldn't be more different: One has players rampage through Manhattan as Rhino, the hulking, horned villain, and the other has players run around as an old man as he tries to collect some papers he's misplaced, yapping non-stop about "kids these days" and Liza Minelli's golden era.

GameStop's pre-order bonus is The Rhino Challenge, a timed destruction event where players suit up as Rhino and break as much stuff as possible. Amazon's bonus is "Play as Stan Lee for the First Time Ever," and has players travel through Manhattan as the Marvel mastermind himself. He uses special abilities borrowed from Spider-Man to collect pages from his latest script, punctuated by "witty banter." A "special surprise" is revealed at the end of the Stan Lee mission, tied into Spider-Man's 50th anniversary this year.
In this article: amazing-spider-man, amazon, bonus, gamestop, microsoft, playstation, pre-order, pre-order-bonus, ps3, rhino, stan-lee, the-amazing-spider-man, xbox
All products recommended by Engadget are selected by our editorial team, independent of our parent company. Some of our stories include affiliate links. If you buy something through one of these links, we may earn an affiliate commission.