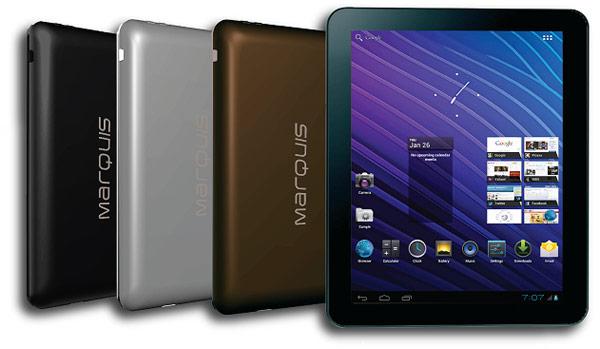 You might remember Le Pan's tablets from CES this year, of which only one was truly ready at the time. The company is now ready to hit the US in earnest, but you'll have to forget the company name along with the earlier designs: it's now Matsunichi, and it's planning to kick off its US-ready makeover through the MarquisPad MP977. The tablet shares the 9.7-inch, 1024 x 768 display of the Le Pan II, but it's now running a slightly speedier dual-core, 1.2GHz TI chip (likely the same OMAP 4430 as in the Droid Xyboard), ships with Android 4.0 out of the gate and comes in a sleeker -- not to mention browner -- shell. Storage is being cut in half over the Le Pan II to just 4GB between the internal memory and a bundled microSD card, though, and the battery is good for a very modest five hours. Nonetheless, the $249 sticker and a May release will put the MP977 in the running with the slower but more capacious Galaxy Tab 2 7.0.

Matsunichi also teased us with a roadmap for a pair of future tablets in the process. The 10.1-inch MP1010 will keep the resolution, but it'll run on a quicker 1.5GHz TI processor and carry a total of 10GB of space when it appears sometime between June and August. If those 0.4 inches of extra glass are just too much to bear, an MP979 will bring all the extra storage and speed of the MP1010 to a 9.7-inch screen sometime between August and September.