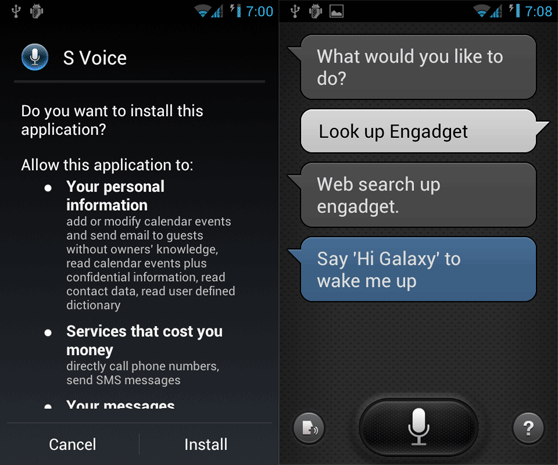 If you find yourself with nothing better to do this weekend, then you might have a bit of fun playing around with Samsung's soon-to-be-released S Voice application on your rooted Android 4.0 smartphone. The APK has now made its way into the wild, and we couldn't help but take it for a spin on our Nexus S. First off, while we can't vouch for the security of the file, we can confirm that it's indeed functional. Secondly, while some of the S Voice features work just fine -- such as search or contact queries -- other requests such as navigation repeatedly caused the app to crash. In other words, if you're expecting this app to behave as it should on the Galaxy S III, you might be in for a disappointment. If you're merely looking to poke around with the S Voice functionality, however, the download seems quite worthwhile. At this point, we're most curious to know whether non-Samsung owners have similar luck. If you're willing to give 'er a go, let us know your experience in the comments below.

Update: We've also now tested the leaked APK on our Galaxy Nexus, and are happy to report that S Voice works quite flawlessly. As always, your mileage may vary.

In this article: android, android 4.0, Android4.0, apk, diy, galaxy s iii, GalaxySIii, ice cream sandwich, IceCreamSandwich, leak, leaked, leaks, root, rooted, s voice, samsung, samsung galaxy s iii, samsung s voice, SamsungGalaxySIii, SamsungSVoice, SVoice
All products recommended by Engadget are selected by our editorial team, independent of our parent company. Some of our stories include affiliate links. If you buy something through one of these links, we may earn an affiliate commission.
Share
Tweet
Share