The iCade Arcade Cabinet famously began life as an April Fool's joke, pulling the video game equivalent of Pinocchio by transforming in a real salable product. The $100 arcade machine-shaped iPad enclosure / controller hit the sweet spot between functionality and retro gaming nostalgia, proving successful enough that Ion found itself with a solid reason to expand the line. Notable amongst the new arrivals are the iCade Core, which offers up the same feature set as the original iCade in a more portable joystick form, and the iCade Mobile, a re-imagining of the product as an oversized iPhone case. The Core carries the same price tag as its predecessor, while the Mobile clocks in at $20 less. So, are these additions worthy of the iCade name? Or would the line have been better served as a one-off? Insert a coin and find out after the break.


Update: Unfortunately, we were provided with incorrect information ahead of the review -- the iCade Core is actually priced at $80, same as the iCade Mobile. 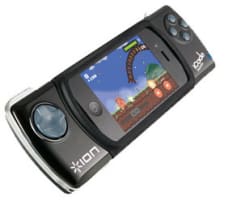 For all Ion's talk of mobility, the iCade Mobile is somewhat unwieldy. This isn't the Fling suction cup add-on we're talking about here -- unless you're still rocking a pair of cargos, you're not going to simply slip the controller in your pocket and be on your merry way. The device is about twice as long, three times as thick and 1.25 times as wide as your iPhone. Thanks in part to the two (included) AA batteries, it's also fairly heavy. The phone sits in a rubber cradle at the center of the device. Ion's also kindly included a little rubber orthotic insert for smaller devices like the iPod touch. We tested the Mobile with an iPhone 4 and a touch, and, while the fit wasn't perfect with either device, neither one fell out. And really, that's the important thing, right? The cradle itself can be pivoted from the base, clicking into place in one of four positions, so you can play in either portrait or landscape mode, depending on the individual game's needs.

The rest of the device is a bit of chintzy affair. To the left is a D-pad, with each direction numbered 1 through 4. To the right are four buttons in a diamond configuration, numbered 5 through 8. Numbers 9 and 0 are reserved for two long, silver shoulder buttons on either end of the device's top edge. Behind these are two triangular gray buttons, numbered E1 and E2, respectively. The numbers primarily come into play when pairing the iCade to your mobile device -- that complicated old Bluetooth dance. The on / off switch is located up top as well, just behind the rubber cradle. When the device is turned on, a blue light on the front will start flashing once you've managed to figure out the whole pairing thing. The rear of the controller juts out a bit on either side, conforming nicely to the hand. The back slides off for when you need to replace those AAs -- though interestingly, you'll need a screw driver to do so. Ion must be pretty confident that you won't be needing to get back there very often.

It all adds up to a homely piece of hardware that looks like something like a modded PSP crossed with some forgotten, knockoff portable console from the '80s -- one designed during a rubber surplus. All told, there's none of the retro flair that made the original iCade Arcade Cabinet so appealing. This time out, it seems obvious that Ion was focused on function ahead of form.

The iCade Core, meanwhile, has a bit more invested in aesthetics than its more portable stablemate. The Core is basically a scaled-down version of the original Arcade Cabinet, retaining the key elements, with the bulk of the arcade machine design traded in for a more streamlined aesthetic that can be tossed into a backpack with ease. The product is missing the charm of nostalgic rainbow colors, faux-wood grain and mock coin slot that helped define the original. For the Core, Ion went for a design that recalls the oversized lap joysticks designed for '80s and '90s consoles by third-party manufacturers.

The feature layout is nearly identical to that of the Arcade Cabinet. At the top of the face is a long slot into which the iPad can be placed in portrait or landscape orientation. The tablet leans up against the lip -- not the most secure fit, with the slate mostly being held in place by its own weight. If you tend to be a bit rough on your controllers, we'd recommend laying off a bit, lest you jostle your shiny Apple product out of its perch. There's no 30-pin connector here, which makes sense since the controller and device talk to each other over Bluetooth.

Below the tablet dock is the same layout as the Arcade Cabinet: a classic arcade-style ball joystick (the red top is really the one piece you have to assemble, unlike the Ikea-esque Cabinet) and four pairs of buttons. As with the Mobile, each button has a corresponding number -- 0 through 9, and E1 and E2. A small red light sits between the iPad slot and the joystick; interestingly, Ion opted not to include a power switch here, instead letting the controller slip into sleep mode when not in use. Waking it back up requires the push of any button or the jiggle of the joystick.

The body of the controller is made of a rugged, if somewhat cheap-feeling plastic. Ion has added a bit of color to spice things up; as with the Cabinet, the buttons come in rows of red, black and white. The color scheme carries over into a few explosion-style graphics painted on the face. Beyond that array, the rest of the body is devoid of buttons and switches. The rear of the device has a power input, for those times when you don't want to burn through AAs and the bottom has a battery door (thankfully not protected by a screw). Ion's also devoted a fair amount of the bottom to Bluetooth pairing instructions -- handy, should you lose the instruction booklet, which, let's face it, you probably will.

On the iCade Mobile, once you've downloaded some compatible titles, made it through the slightly complicated syncing process and slipped your iPhone into the rubber sleeve, you're good to go. Unfortunately, the game selection for the Mobile is still limited compared to its iPad-friendly counterparts. Of course, that's likely to improve should the Mobile catch on, but as with any other peripheral, it's all about the games. For now, we started off by downloading Paper Monsters, a terrific little 3D sidescroller. The first thing that struck us was just how few of the buttons we ultimately used during gameplay. Ion probably wanted to maintain some consistency with the Arcade Cabinet's configuration, but you're generally not likely to need two sets of shoulder buttons. The sides of the device are rather far apart, given the fact that a whole iPhone is sandwiched between the two, though people accustomed to the large screen on the PlayStation Vita might won't find the hand placement too awkward.

The buttons, too, feel a bit cheap compared to what you get on a console like the Vita, but that's not entirely unexpected for a smartphone add-on. Once it's up and running, however, the Mobile is quite responsive, forming an instant and seamless link between the two devices. It beats the awkwardness of touchscreen gaming: moving your hands out from in front of the screen goes a long way in reducing the likelihood of an accidental key press.

As with the Mobile, Bluetooth pairing is a bit complicated on the Core, but once you've mashed the right buttons in the correct order, the controls work extremely well. Like the Arcade Cabinet, however, the joystick and buttons are rather loud, making an audible clicking sound every time you make a move, so don't expect to go and, you know, play the thing in the library any time soon. Similar to the Mobile we found that most of the games we played only relied on a couple of buttons, tops, like the Megaman-esque Meganoid, which largely just required using the joystick and a single button for navigation. But while the full spread of buttons is overkill in most cases, it's hard to deny that utilizing the classic arcade setup adds a whole other dimension to the iPad gaming experience.

There's little question that the nostalgic charm of the first-generation iCade didn't fully translate when Ion updated the line with more portable, cheaper options. But while the Mobile and Core don't offer up the same faux-wood-grained charm of their predecessor, they both at least work as advertised, bringing a gaming experience to the iPhone and iPad that simple touchscreen controls just can't match. In spite of their $80 / $100 price tags, the Mobile and Core do feel a bit cheap, but if you're looking to take your mobile gaming to a slightly less casual level, these peripherals could well do the trick.