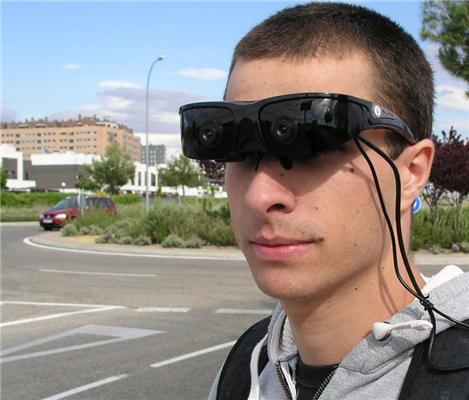 The crafty engineers at Google aren't the only ones working on augmented reality glasses. Researchers at the Universidad Carlos III de Madrid have created a prototype system, based around a head-mounted display and a pair of small cameras. Instead of overlaying info about landmarks or capturing video of your trampoline-based escapades, this prototype is simply meant to help the visually impaired detect and avoid obstacles. A small computer performs real-time analysis of the environment highlighting objects and color coding them to indicate distance. The goal is to help those with glaucoma and other impairments that hinder depth perception. The next step is to streamline the device, making the computer portion of it smaller and more portable and to make the goggles less cumbersome. For more detail check out the source link.

In this article: ar, ar glasses, ArGlasses, augmented reality, augmented reality glasses, AugmentedReality, AugmentedRealityGlasses, health, Instituto de Oftalmología Aplicada, InstitutoDeOftalmologíaAplicada, medicine, research, visually impaired, VisuallyImpaired
All products recommended by Engadget are selected by our editorial team, independent of our parent company. Some of our stories include affiliate links. If you buy something through one of these links, we may earn an affiliate commission.
Share
Tweet
Share