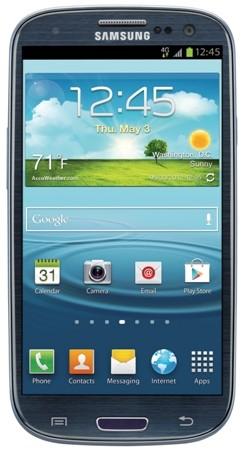 T-Mobile US isn't letting Verizon bask in the spotlight for too long, as it just announced that June 21st will be the magic date it begins offering the Samsung Galaxy S III in stores. From what we can tell, this particular flavor of the device has seemed to escape a good chunk of carrier influence, with the traditional home button model staying intact. As we've been expecting, the GSIII will come in 16 and 32GB models (price is still an unknown at the moment, though $200 and $250 respectively seems to be the popular choice so far), run on a Snapdragon S4 dual-core CPU clocked at 1.5GHz and offer an impressive 2GB RAM. It doesn't appear that T-Mo will be allowing pre-orders through official retail channels, but you can sign up for a reminder by going to the link below. But don't worry if you forget to do that -- we'll keep you posted on all the updates no matter what.

BELLEVUE, Wash. - June 4, 2012 - T-Mobile USA, Inc., the No. 1 mobile operator brand in Samsung Galaxy S sales, and Samsung Telecommunications America (Samsung Mobile), the No. 1 mobile phone provider in the U.S. and the No. 1 smartphone provider worldwide,1 announced the upcoming release of the highly anticipated Samsung Galaxy S® III. Starting June 21, T-Mobile® customers will have the opportunity to own one of the most innovative smartphones in the market to date, joining the popular Galaxy S family of devices.

"We have a tremendous history of working with Samsung to bring cutting-edge devices to market, and we know our customers are excited to get their hands on the Galaxy S III," said Brad Duea, senior vice president, product management, T-Mobile USA. "As we continue to aggressively compete, this device is yet another example of how T-Mobile delivers amazing devices and 4G experiences to our customers."

· Connecting and Sharing: Imagine shooting a video with a group of friends and being able to share it immediately with others in the group. The Galaxy S III enables group sharing via Wi-Fi Direct™ so that content such as a video or photo on one device can easily be shared with up to five other Galaxy S III devices. That same video or photo can also be viewed by the group on a compatible big screen TV, such as a SmartTV, using AllShare®. With an advanced 8-megapixel camera with LED flash and zero shutter lag and a 1.9-megapixel front-facing camera, the Galaxy S III will capture beautiful HD videos and photos that are perfect to share.


· Entertainment: Whether waiting for an appointment or commuting on the bus, customers can take in the latest action movie in full HD from Samsung Media Hub or catch their favorite TV show with T-Mobile TV in Mobile HD2. Images appear crisp and clear on the Galaxy S III's 4.8-inch HD Super AMOLED screen, bringing entertainment to life on the device. In addition, customers can choose between 16 GB or 32 GB of internal memory, and have the option for expandable memory via a MicroSD slot, providing plenty of storage for downloading movies, music, games and other apps. Featuring Android™ 4.0 (Ice Cream Sandwich) and a Qualcomm® Snapdragon™ S4 Processor with 1.5 GHz Dual-Core CPUs and 2GB of RAM, the Galaxy S III also offers a large, 2100mAh battery to power hours of on-the-go entertainment.

· Productivity: For customers who want to use the device in their business and personal lives, T-Mobile's Galaxy S III offers a suite of security features delivering enterprise-friendly capabilities. From syncing corporate email, calendars and contacts to providing on-device encryption, the Galaxy S III makes it easy to maximize efficiency and productivity for enterprise users. T-Mobile customers also have access to Wi-Fi Calling and the Smartphone Mobile HotSpot feature ensuring easy and reliable connectivity while on the road.