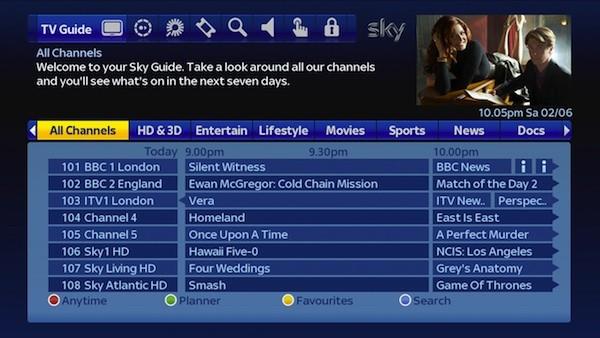 The last time we checked in on Sky+'s UI, the UK TV broadcaster was updating its set-top boxes around the time of the '08 Olympics and now it's starting to roll out a new look just in time for the 2012 Games. The new guide brings HD graphics with new colors and fonts, improved navigation by displaying listings for eight channels at once (up from six), the ability to sort DVR recordings by genre, and a new landing page that sorts content from various sources -- live, DVR or video on-demand -- by genre. More subtle changes include a now-translucent "search and scan" banner and retooled accessibility menu that puts audio options first. According to Sky the initial rollout will hit tens of thousands of Sky+HD boxes today and slowly grow to millions more by year-end. Check out a few screenshots in the gallery below or a video demo of the new features after the break for a first hand look, then let us know if they suit your viewing style. 7
In this article: dvr, gui, guide, hd dvr, HdDvr, hdpostmini, hdtv, live tiles, LiveTiles, sky, sky tv, sky+, sky+ hd, Sky+Hd, SkyTv, tv, update, video, video on demand, VideoOnDemand, vod
All products recommended by Engadget are selected by our editorial team, independent of our parent company. Some of our stories include affiliate links. If you buy something through one of these links, we may earn an affiliate commission.
Share
Tweet
Share