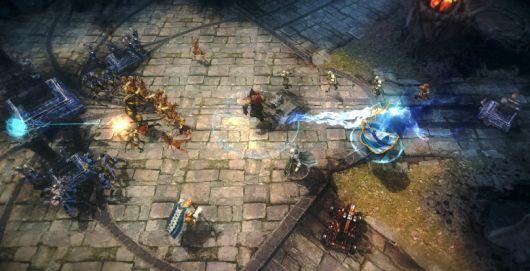 Monolith Productions has one of the most varied histories in video game development. The studio first cut its teeth on first-person shooters, finding a cult hit in the popular No One Lives Forever series. Then, it was a vast experiment with The Matrix Online, before coming back to shooters with the Fear and Condemned series of games. And now, the company's trying to reinvent itself yet again with two licensed downloadable titles for Warner Bros. Interactive Entertainment: first Gotham City Imposters from earlier this year, and now Guardians of Middle-earth.

Guardians of Middle-earth is a weird one. It's a licensed Lord of The Rings title, starring characters from Tolkien's series. It's a MOBA game, similar to League of Legends or DOTA 2, featuring Tolkien's characters fighting it out across a battlefield full of AI-controlled troops. And it's a complicated, deep online multiplayer title, designed for competitive play.

"What's so weird about that?" you ask? It's being developed only for consoles. Monolith started with the premise that it wanted to "make a new experience for console players," says producer Tim Coolidge, and the team turned early to the MOBA genre. Pioneered by Defense of the Ancients, originally a Warcraft 3 mod based on a Starcraft map, MOBA combines RTS select-and-move mouse controls with action RPG progression on a 5v5 player competitive map. It's a dense game structure, full of complex strategies and quick mouse-and-keyboard controls. In other words, it's exactly the kind of game you wouldn't bring to consoles.

"One thing we found out really early on was that single target abilities are really hard to pull off. Obviously on a PC you can click on a specific guy. But on the console we found that anything where you're single targeting was really difficult," says senior producer Ruth Tomandl. "So what we did is pretty much all the abilities are line attacks or cone attacks around you, and if a Guardian is within that cone then that's who your ability will really affect."

Believe it or not, the controls work: I was able to pull off abilities and combos with nearly as much complexity as the PC MOBAs. Legolas, for example, has a rooting ability that locks enemy players down, as well as a quick dash ability, and another one that knocks back targets away from him. After a little bit of practice, I was able to use those abilities together, dashing forward past a fleeing enemy, knocking him back into harm's way, and then locking him down in place for the finish. The toughest part is making sure the aiming is lined up (you move with the left stick, and target with the right), but it's amazing that it works on a controller at all.

There are other changes to the game as well, like the complete lack of an item store. Usually, players progress and customize their characters by buying items with earned gold during a match. "Something like an item store is a lot more ponderous than we wanted to go with," says Tomandl.

The game still needs progression, however, so Monolith came up with two solutions. First, each character has what's called a "gem belt," in which you set certain gems that then activate as a match goes on. You can customize your gem belt to boost a character's speed, damage, spell ability, or whatever, and multiple gem loadouts can be saved and chosen before a match (to counter an opposing team's heroes for example).

Secondly, the game's towers are upgradeable. As the game goes on, players can unlock upgrades to add a healing area spell to towers, or boost their damage or health. Any player on the team can upgrade the towers by standing near them, and so there are plenty of choices to be made there. That helps the game's progression, too – taking a tower down at endgame can be very different from taking it on early.

Guardians has a lot of interesting ideas in it for sure, and it'll be fascinating to see how console players react to the very complicated MOBA gametype, along with the specific tweaks Monolith has made to the genre. "I think the controls ended up being similar to other console games like action RPGs," says Tomandl. "There's a little bit of synergy there, so people used to playing other console games pick it up all right."

If Monolith can successfully bring the growing MOBA gametype over to console players when the game arrives this fall, it may be able to redefine itself as a developer yet again.
In this article: dota, e3, e3-2012, guardians-of-middle-earth, microsoft, moba, monolith, monolith-productions, playstation, playstation-network, preview, ps3, psn, release, ruth-tomandl, tim-coolidge, warner-bros, warner-bros-interactive, warner-bros-interactive-entertainment, warner-brothers-interactive, wbie, xbla, xbox, xbox-live-arcade
All products recommended by Engadget are selected by our editorial team, independent of our parent company. Some of our stories include affiliate links. If you buy something through one of these links, we may earn an affiliate commission.