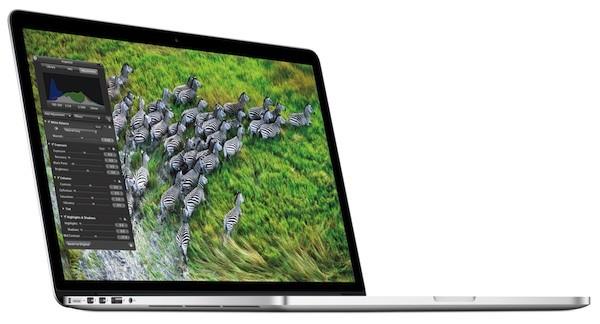 Apple announced some new MacBook Airs and MacBook Pros early in its WWDC keynote today, but it had another surprise in store for its big hardware announcement: the next-generation MacBook Pro. It packs a Retina display with a 2880 x 1800 resolution (or 220ppi), and a casing that measures just 0.71-inch thin and weighs 4.46 pounds. In addition to that high resolution, Apple is also promising higher contrast ratios, better viewing angles and reduced glare compared to other laptop displays, and it's updated all of its stock apps to take advantage of those extra pixels, not to mention Aperture and Final Cut Pro -- "reading your mail is like reading fine print," according to Apple's Phil Schiller. As for the other specs, you'll get up to 16GB of RAM, NVIDIA Kepler GT 650M graphics, up to a quad-core 2.7GHz Core i7 processor, a maximum 768GB of storage (SSD, naturally), and a promised seven hours of battery life with 30 days standby. One spec nowhere to be seen: an optical drive.

Also on the outs are Ethernet and FireWire 800 ports, which you'll now need an optional Thunderbolt adapter to use, but you do now get two USB 3.0 ports in addition to a pair of Thunderbolt inputs (plus one HDMI). Making its debut on the laptop is a new, thinner MagSafe 2 connector, as well as a new fan that's said to be "nearly imperceptible" to the user. Pricing starts at $2,199 for a 2.3GHz unit with 8GB of RAM and 256GB of storage, and it's shipping today. Just how big a deal is it for Apple? "It's without doubt the very best computer that we've ever built," says Schiller.

Update: Check out our hands-on look at the laptop right here.

For more coverage of WWDC 2012, please visit our event hub.

SAN FRANCISCO--(BUSINESS WIRE)--Apple® today unveiled an all new 15-inch MacBook® Pro featuring a stunning Retina™ display, all flash storage and quad-core processors in a radically thin and light design. Measuring a mere 0.71 inches and weighing only 4.46 pounds, the completely redesigned MacBook Pro sets a new standard in performance and portability for pro users.

The new MacBook Pro Retina display is the world's highest resolution notebook display with over 5 million pixels, 3 million more than an HD television. At 220 pixels-per-inch, the Retina display's pixel density is so high the human eye cannot distinguish individual pixels from a normal viewing distance, so text and graphics look incredibly sharp. The Retina display uses IPS technology for a 178-degree wide viewing angle, and has 75 percent less reflection and 29 percent higher contrast than the previous generation.

Featuring a precision engineered aluminum unibody design and an all flash storage architecture, the all new MacBook Pro is the lightest MacBook Pro ever and nearly as thin as a MacBook Air®. Flash storage that is up to four times faster than traditional notebook hard drives enables the all new MacBook Pro to play four simultaneous streams of uncompressed 1080p HD video from internal storage.* The flash storage architecture also delivers improved reliability, instant-on responsiveness and 30 days of standby time.

The MacBook Pro with Retina display features the latest Intel Core i7 quad-core processors up to 2.7 GHz with Turbo Boost speeds up to 3.7 GHz, NVIDIA GeForce GT 650M discrete graphics, up to 16GB of faster 1600 MHz RAM and flash storage up to 768GB. Two Thunderbolt and two USB 3.0 ports allow pro users to connect to multiple displays and high performance devices, and a new HDMI port offers quick connectivity to HDTVs.

The all new MacBook Pro ships with OS X Lion. Starting today, customers who purchase a Mac are eligible for a free copy of OS X Mountain Lion when it becomes available. Mountain Lion introduces innovative features including the all new Messages app, Notification Center, system-wide Sharing, AirPlay® Mirroring, Game Center and the enhanced security of Gatekeeper. With iCloud® built into the foundation of OS X, Mountain Lion makes it easier than ever to keep your content up to date across all your devices.

In this article: apple, mac, macbook, macbook pro, MacbookPro, next generation macbook pro, NextGenerationMacbookPro, retina, retina display, RetinaDisplay, video
All products recommended by Engadget are selected by our editorial team, independent of our parent company. Some of our stories include affiliate links. If you buy something through one of these links, we may earn an affiliate commission.
Share
Tweet
Share