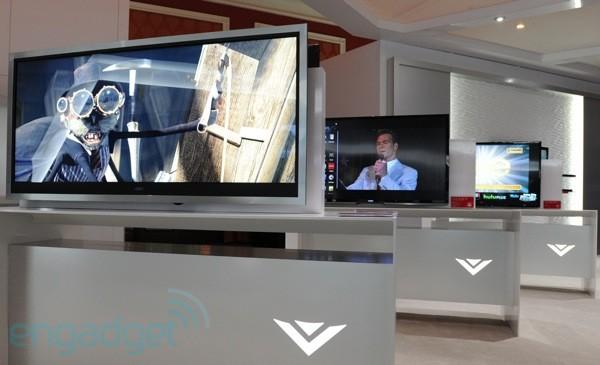 It's been a long, long wait for Vizio's ultrawidescreen LCD TV to show its face: the company was promising such sets starting around this time last year that ultimately missed the October and subsequent March targets. Vizio is one to eventually make good on a promise, though, and has just started shipping the first XVT series CinemaWide set. The lone 58-inch model's focus remains on that 2560 x 1080p screen, whose stretchy 21:9 aspect ratio fits what you often see at the movie theater without having to crop or adjust like you would with a typical 16:9 set. Whether or not you have a chronic aversion to black bars, the CinemaWide is still a respectable set in its own right, with edge-based LED backlighting, a 120Hz refresh rate, a Bluetooth remote and the common host of Vizio internet apps. The TV maker must be doing a form of penance for taking its time on the 21:9 display: the $2,800 regular price is a lot lower than the originally quoted $3,500, and you can pick up the CinemaWide TV for $2,500 if you act quickly. 8
In this article: 120 hz, 120Hz, 21:9, 58 inch, 58-inch, 58Inch, aspect ratio, AspectRatio, bluetooth, cinemawide, hdpostcross, home entertainment, HomeEntertainment, television, tv, ultra widescreen, UltraWidescreen, vizio, vizio internet apps, VizioInternetApps, xvt, xvt cinemawide, xvt series, XvtCinemawide, XvtSeries
All products recommended by Engadget are selected by our editorial team, independent of our parent company. Some of our stories include affiliate links. If you buy something through one of these links, we may earn an affiliate commission.
Share
Tweet
Share