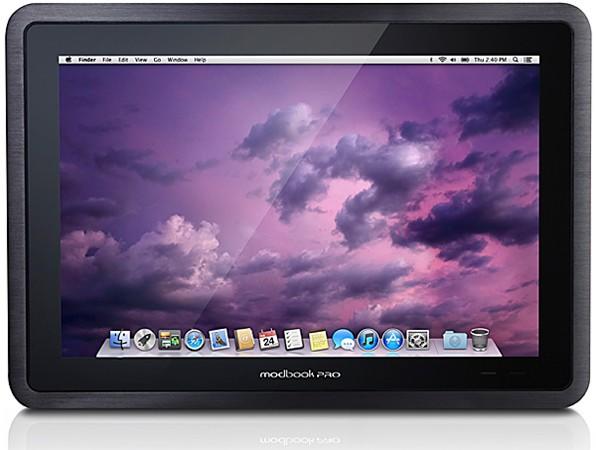 You'd be forgiven for assuming that the ModBook dream died with release of the first iPad. After all, the first version of the hacked notebook predated Apple's announcement by a couple of years. When the iPad finally hit in 2010, it did a lot to address the desire for a slate device running Apple software. Since then, things have largely remained silent on the Axiotron front. In fact, the last time we heard a significant peep out of the company was back in 2009. Its former CEO Andreas Haas assured us, however, that the real reason for the company's silence is a bit more complicated than the story of yet another product falling victim to the Apple steamroller.

"Axiotron itself was a great company," says Haas. "Back in 2008, I took the company public, everything was really great. There was one little thing that turned out to be a huge problem, which is that the company was largely bank-financed and 10 days after it went public, Lehman Brothers went belly-up and put the whole financial market in a tailspin. After that was mostly spent on trying to somehow restructure the company, and ultimately there was just nothing that could be done about it."

As the newly reborn Modbook Inc. teased via its Facebook page yesterday, however, the name lives on. This week marks the return of the tablet in the form of the 13.3-inch Modbook Pro, a device slated to ship early this fall. Can such a device survive in a world that's been downright flooded by tablets in the years since its predecessor's release? The company clearly feels it can -- that its new product is unique enough to set itself apart in amongst the deluge of slates, calling the new Pro, "the world's most powerful and largest-screen tablet computer." And in a space where hardware and software are relatively neutered, it's understandable how the company might be inclined to make such bold claims about the converted notebook.

There's certainly no lack of context on Haas' part. Prior to Axiotron, the exec was a part of Apple's Newton Systems Group, calling himself "the guy who had to close the whole thing down." He tells us, "When I joined that group I actually wanted to see the pen on the Mac, because I remember there was a development unit that was shown to Andy Warhol to draw on a Mac, and he just loved it. I always felt, that is what I wanted to do, but then John Sculley came along and said, 'Ooh, I have a good idea about a personal digital assistant and I need a pen,' and he actually took the handwriting recognition and the pen work that had been done on the Mac and took it away and moved it over to [the PDA]."

When we started the Modbook, the premise was always to be a model citizen in the Apple environment.

That Warhol-inspired passion project was borne out as the Modbook back in 2007, a hacked MacBook that embraced the slate form factor that had all but vanished by that point. In spite of Apple's notoriously litigious background, however, Haas claims that the company managed to launch the product without ruffling any Cupertino-area feathers. "When we started the Modbook, the premise was always to be a model citizen in the Apple environment," he tells us. "When it comes down to it, we are really only a third-party that is building an accessory. When I was at Axiotron and we brought out that Modbook, before I did this I didn't ask anyone permission, I just looked up the rules and built within those rules. When I brought it out, Apple actually came to me and gave me a proprietary solutions provider contract which is something like a manufacturing license to actually get people from Apple and put them together, but that is incompatible with our distribution system. So after that they moved us over to an Apple Premier Developer and that is what we are now, we're an Apple Developer. We sell the kit, which is a conversion kit, to our sales partners and those sales partners then perform the conversion on your behalf."

After the aforementioned financial concerns sidetracked the company, Haas began working on bringing the Modbook back to life by way of an eponymous new company built around a number of former Axiotron employees. "[In the] beginning of this year, in order to continue working on my vision to create that next-generation MacBook, I had no choice but create a new company," he explains. "I was lucky that my old core team was able to join again and since the beginning of the year, we have spent no time on anything else but coming up with the best device. Now we have the company on solid financial footing now and we don't have to worry about that, and can just focus on what you, for example, as an end-user actually care about."

Finger painting is fun when you're five years old, but as soon as you get serious about it, you start picking up a stick or a pencil.

That, naturally, is the new Modbook Pro -- a device that, Haas explains, isn't something that will compete directly against the iPad and its ilk. "If you are a creative-minded person, you're working in the creative industry and you start drawing on an iPad, at some point you'll grab a stylus, and if you do that, then you will end up eventually looking at a Modbook Pro." Or, to put it more bluntly, "Finger-painting is fun when you're five years old, but as soon as you get serious about it, you start picking up a stick or a pencil, that's how you evolve as a human being from boy to man or from girl to woman." In other words, if the iPad is kindergarten-style finger-painting, the Modbook is the almighty number two pencil.

It's easy to see his point -- the iPad and most Android tablets are certainly limited as tools for creative professionals. The Modbook Pro, on the other hand, gives the user full OS functionality on a stylus input device. With the base configuration, you're getting a 2.5GHz, dual-core Intel Core i5 processor (upgradable to a 2.9GHz, dual-core Intel Core i7), up to 16GB of RAM and up to either a 1TB HDD or 960GB SSD, for starters -- this is very much a real computer. On top of all of that is a pen system that offers 512 pressure levels on its 1280 by 800 pixel display.

I would actually expect you to end up on the Windows side of things.

And unlike past Modbooks, born in an era in which dual-boot wasn't the MacBook standard, the company is now pushing the Windows experience on this device. "The Modbook Pro runs both Windows 7 and OS X," says Haas, "and if you use them side-by-side and you don't mind, if you are one of those users who'd rather lose his right arm than a Mac operating system and you don't care, then I would actually expect you to end up on the Windows side of things." Haas says he's equally enthused about the arrival of tablet-friendly Windows 8. "We're looking forward to it. Windows 7 already is a great operating system to be used with a pen, and we're looking forward to Windows 8 showing up, shortly after we start shipping our products." He adds, "having Windows upgrade the operating system to a better interface [is something] we welcome, because that makes our device even better all around. And if the other manufacturers don't change their hardware and actually change their target group, it doesn't bother us." In other words, as long as other device makers target consumers and not professionals, Modbook will be just fine.

That remains to be seen, of course. After all, much of the company's success lies in pricing, which is likely to be fairly high, even by professional standards, with aftermarket costs. It's information that we should be seeing in the coming weeks. The tablet itself, meanwhile, is due out at an unspecified date in the early fall.

The Modbook Pro will begin shipping in the United States in early fall.Like its predecessor, the award-winning Modbook®, the Modbook Pro is an innovative computer modification product. The Modbook Proenclosure conversion kit incorporates and completely encases the originalhardware of a new Apple® MacBook® Pro 13.3-inch base system runningOS X® Mountain Lion. In addition, the Modbook Pro contains a state-of-the-art digitizer from the industry leader in pen tablet technology,Wacom®, offering 512 levels of pen pressure sensitivity - more than anyother tablet computer on the market. And the Modbook Pro's peninterface features tough and scratch-resistant ForceGlass™, providing anetched, paper-emulating drawing and writing surface.

Taken together, the Modbook Pro's power, portability and high-resolutionpen input make it the ideal mobile workstation for creative users."We can't wait to get the Modbook Pro into the hands of the users wedeveloped it for," said Andreas E. Haas, Modbook Inc.'s chief executiveofficer and chief technology officer. "In terms of its design andengineering, the Modbook Pro is not an incremental step but a leaps-and-bounds advance over the Modbook. Its sheer power makes it a lot of funto use."

Designed with Creative Users in MindSturdy and portable, the Modbook Pro has a strongest-in-class enclosureand lightweight internal core made of aircraft-grade, precision-machinedaluminum. Unlike plug-in pen tablet displays, the Modbook Pro is acomplete all-in-one computer that can easily be slipped in and out of abackpack and used anywhere (up to seven hours on a single charge)without cables, display adapters or breakout boxes. Its distinctive sloped-edge shape and 3D-GripFeet™ allow it to be propped up to 50 degreeson all sides without slipping.With 512 pen pressure levels, the pen tablet system facilitates extremelyprecise control of renderings. Included with the Modbook Pro is a best-in-class digitizer pen with two programmable side buttons and digital eraser.

The pen is securely stowed in the built-in, magnetic catch-equipped pengarage.The Modbook Pro's crisp 13.3-inch (diagonal) display has a native 1280 by800 pixel resolution. The display, digitizer and ForceGlass screen assemblyare flush-mounted, resulting in a completely level drawing and writingsurface that maximizes on-screen workspace.Unrivaled Mac-Based Pen Tablet ComputerTo accomplish the inclusion of the MacBook Pro base system's hardware,the Modbook Pro employs a unique ExoConnect™ system. ExoConnectlinks the Modbook Pro components to the base system via one of its twoexternal USB ports - the connection and the port itself are permanentlysealed within the Modbook Pro, leaving all the other ports on theinput/output panel unobstructed.

The Modbook Pro is the only tablet computer with the ability to boot intoboth OS X and Windows 7, unlocking the whole world of availableapplications on either platform: Adobe® Photoshop®, Encore® andPremiere® Pro; Autodesk® Sketchbook® Pro and AutoCAD®; AppleAperture® and Logic® Pro; Corel® Painter™; and many others.

No matterwhat project or requirement, the Modbook Pro's unique cross-platformcapability together with its powerful pen tablet features enable the soup-to-nuts creation of high-resolution, pro-quality creative deliverables

In this article: apple, axiom, macbook, mod, modbook, modbook inc., modbook pro, ModbookInc., ModbookPro, os x, OsX
All products recommended by Engadget are selected by our editorial team, independent of our parent company. Some of our stories include affiliate links. If you buy something through one of these links, we may earn an affiliate commission.
Share
Tweet
Share