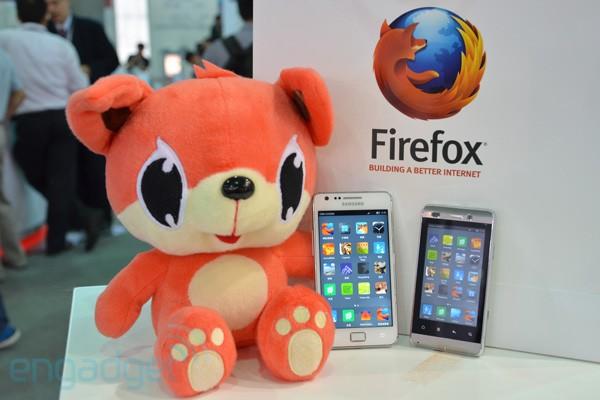 Sure it's not as catchy as "Boot to Gecko," but Mozilla's newly-christened Firefox OS has already gained favor with a number of carriers, including Deutsche Telekom, Smart, Sprint, Telecom Italia, Telefónica and Telenor -- as previously reported, Telefonica-owned Vivo is set to introduce the earliest handsets early next year in Brazil. On the manufacturing side of things, ZTE and TCL Communication Technology (Alcatel One Touch) have signed on to make phones based on the HTML5-powered mobile operating system. Firefox OS will be positioned as a low-priced, entry-level alternative to leading mobile operating systems.

Industry support is growing behind Mozilla's plans to launch a new fully open mobile ecosystem based on HTML5. The operating system, which Mozilla today confirmed will use its Firefox brand, will power the launch of smartphones built entirely to open Web standards, where all of the device's capabilities can be developed as HTML5 applications.

Mapping to key Firefox footprints around the globe, leading operators Deutsche Telekom, Etisalat, Smart, Sprint, Telecom Italia, Telefonica and Telenor are backing the open Firefox OS as an exciting new entrant to the smartphone marketplace. They have also identified the potential of the technology to deliver compelling smartphone experiences at attainable prices.

Device manufacturers TCL Communication Technology (under the Alcatel One Touch brand) and ZTE today announced their intentions to manufacture the first devices to feature the new Firefox OS, using Snapdragon(TM) processors from Qualcomm Incorporated, the leader in smartphone platforms. The first Firefox OS powered devices are expected to launch commercially in Brazil in early 2013 through Telefonica's commercial brand, Vivo.

The Firefox OS for mobile devices is built on Mozilla's "Boot to Gecko project" which unlocks many of the current limitations of web development on mobile, allowing HTML5 applications to access the underlying capabilities of a phone, previously only available to native applications. Telefonica's Digital unit joined forces with Mozilla earlier this year to take this work and showcase a new phone architecture where every phone feature (calling, messaging, games, etc.) is an HTML5 application.

Due to the optimization of the platform for entry-level smartphones and the removal of unnecessary middleware layers, mobile operators will have the ability to offer richer experiences at a range of price points including at the low end of the smartphone price range, helping to drive adoption across developing markets.

Mozilla and all other participants are committed to ensuring the project is fully open and the reference implementation of the required Web APIs is being submitted to W3C for standardization.

"The introduction of the open mobile OS continues the Mozilla mission to promote openness, innovation and opportunity on the Web for users and developers. As billions of users are expected to come online for the first time in the coming years, it is important to deliver a compelling smartphone experience that anyone can use," said Gary Kovacs, CEO, Mozilla. "The large number of operators and manufacturers now supporting this effort will bring additional resources and diversity to our global offerings."

In this article: Deutsche Telekom, DeutscheTelekom, Etisalat, firefox, mozilla, Smart, sprint, TCL Communication Technology, TclCommunicationTechnology, Telecom Italia, TelecomItalia, Telefonica, Telenor, ZTE
All products recommended by Engadget are selected by our editorial team, independent of our parent company. Some of our stories include affiliate links. If you buy something through one of these links, we may earn an affiliate commission.
Share
Tweet
Share