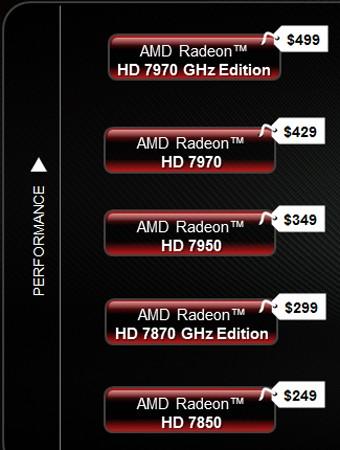 The recent release of the Radeon HD 7970 Ghz Edition is having knock-on benefits further down the stack. $20 has now been shaved off the regular 7970 rrp in addition to the last discount we reported, while the 7950 is down $50 to $349 and the 7870 has also been nudged $50 deeper into the mid-range sweet spot at $249. Other cards in the line-up may also drop by some degree, although there's no official word on those just yet. These summer prices should start having an impact in stores from today -- just in time to benefit from the latest Catalyst 12.7 drivers, which promise to bring significant performance gains and hence even more tension to your NVIDIA product comparisons.


On June 22, 2012, AMD introduced the World's Fastest and Most Versatile GPU with the AMD Radeon™ HD 7970 GHz Edition. Based on our Graphics Core Next architecture, the AMD Radeon™ HD 7970 GHz Edition was specifically designed for the ultra-enthusiast gamers, enabling the best gaming experience with the latest DirectX® 11 titles in ultra-high resolutions and with multiple displays as well as offering unmatched compute performance. To continue offering the best value to prospective buyers, we are now announcing an update to the suggested pricing on three of our high end Graphics Core Next products.

In addition to the pricing updates, every one of our AMD Radeon™ HD 7000 Series products received a significant performance bump with our recent AMD Catalyst™ 12.7 drivers. By delivering higher performance in top games such as Skyrim (>30%), Shogun 2 (>15%) and Batman Arkham City (>30%), Graphics Core Next continues to get better with every driver release. We expect these prices to be reflected at major e-tailers as of Monday July 16th.